Violence from both sides

And while I'm giving credit where credit's due to BBC Trending's Mike Wendling, it's only fair that I do an update on something I wrote a month ago today: 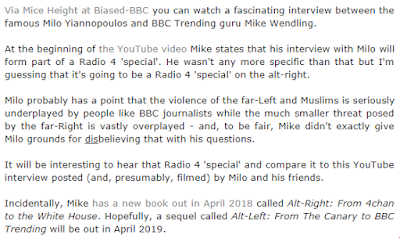 Well, that Radio 4 'special' was broadcast last Monday. Entitled Political Violence in America, it looked at the violence of both the far-right and the far-left.

On the Milo question, very little of that interview was played - less than a minute.

All in all, however, it struck me as being a fair take on the matter. Both sides got a hearing.

One amusing thing (well, it amused me!) was that the Antifa woman Mike talked to after a melee at one protest, who was making much of the violence from the far-right against her and her fellow campaigners, was almost immediately afterwards arrested and charged with inciting a riot. And when Mike arranged a meeting with her at a later date (after she'd rang him up jubilantly having got a far-right event cancelled) she wasn't able to make it because she'd now been arrested on suspicion of battery and resisting arrest!
Posted by Craig at 09:03