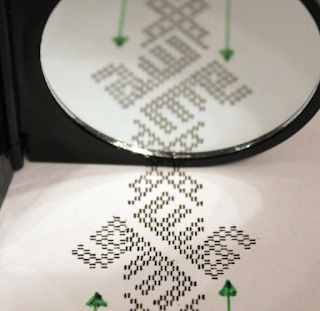 On a similar theme, the BBC (along with the rest of the media) is reporting the claim from Uppsala University that the Arabic words for 'Allah' and 'Ali' have been found in Viking burial garments in Sweden (the one of 'Allah' being in mirror image, for some reason).

According to the BBC's account, the Swedish researchers speculate that the graves' residents might have been Muslim or, more likely, that the Viking culture might have been influenced in their life-and-death beliefs by Islam.

In Tharik Hussain's BBC piece, the possibility that these Vikings came into possession of these burial garments during their extensive interactions with Islamic states (by either trading or, even more likely, by plundering) isn't dwelt upon. In fact it isn't even mentioned.

Curiously, however, the very next account I turned to - National Geographic's - puts the Islamic influence speculations after pointing out the following:

Ms. Larsson clearly doesn't belief the 'plundering' option can account for her finds though.

Aha! The fact that this Viking burial site is called Birka and, on the principle that 2+2=5, because that sounds very much like the Arabic word 'burqa' that's all the proof I need that these professors from Sweden must be correct. Wonder if any Viking women in burqas will be found there soon?

Update (via Kaiser at Biased BBC): Spot what's missing from the Daily Mail image of the lettering and the BBC's slightly cropped version of the same image:

Yes, the story-complicating pagan swastika has been cropped from the BBC's version of the image. Why?

Well might sceptical commentators wonder why these Muslim Vikings/Islam-influenced Vikings were using the Norse image of the sun in their burial garments. Perhaps we can discount the suggestion that they were simply Viking Muslims then?
Posted by Craig at 12:45