Watching BBC One's News at Six last night, there was Nick Bryant live outside the US National Archives enthusiastically brandishing a document:

And there is this fabulous document from the CIA station in London talking of an anonymous phone call to a British newspaper, the Cambridge News, 25 minutes before JFK was killed, as his motorcade was going through the streets of Dallas, telling a reporter to ring the American embassy because there was going to be big news in the offing. That is intriguing. It could be completely irrelevant, but it shows that this document dump which was supposed to kill off the conspiracy theorists could end up actually fuelling them.

"The caller said only that the Cambridge News reporter should call the American embassy in London for some big news and then hung up", said the released memo.

I found this out from glancing at my Twitter feed this morning and seeing a tweet from BBC Trending's Mike Wendling linking to a 2013 report in the Hertfordshire Mercury - sister paper to the Cambridge News.

The article in full runs as follows: 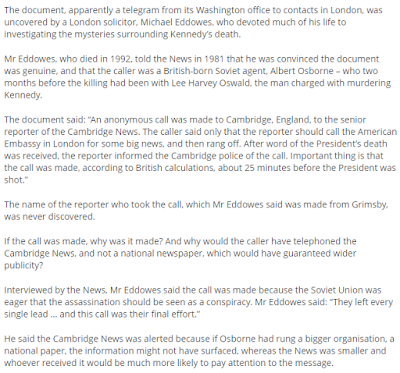 Mike Wendling excepted here, I have to say that yesterday's reporting of this part of the JFK documents release story makes much of the world's media look like lazy, incompetent buffoons, all getting heavily excited about this memo but failing to check whether it's actually anything new or not.

And, yes, I'm putting this down to a worldwide media cock-up rather than a conspiracy!
Posted by Craig at 07:35