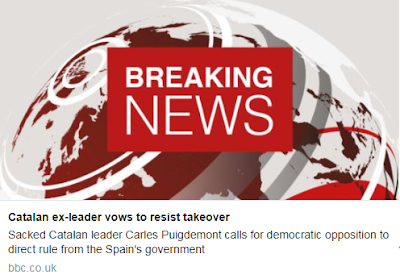 Here's one I'm not at all sure about, so what do you reckon (if you don't mind me asking)?

I'm seeing lots of complaints (from left and right) that the BBC is using loaded language against the Catalans who favour independence from Spain.

One term that's getting people's goat is "separatists," which some see as a negative term, while others dislike the use of "rebellious", saying it is echoing the language used by the Spanish government and, therefore, not neutral.

Many also strongly object to the language being used by the BBC about Carles Puigdemont, saying that terms like "ex-leader", "former president of Catalonia" and "sacked" are biased as Mr. Puigdemont is still the leader of Catalonia until the moment he and the Catalan people decide otherwise and that this is the BBC once more parroting Spanish government propaganda (or, if you prefer, echoing the British government's position).

What do you think? Is this loaded pro-Spanish language from the BBC or merely the BBC using language that factually reflects the facts as they are on the ground?
Posted by Craig at 17:16