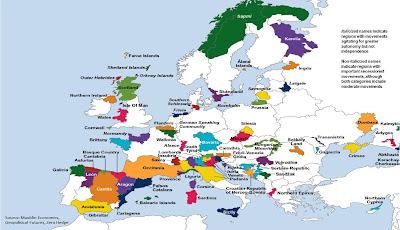 Here's a transcription from this morning's The Andrew Marr Show of the very interesting interview with historian Antony Beevor on the subject of Catalonia, posted purely for the sake of posterity.

AM didn't get it off to an entirely accurate start, mistakenly asserting that George Orwell fought "for the anarchists" - something Antony Beevor ever-so-discreetly corrected him over later - but, still, there were lots of illuminating ideas here, and the interview has rightly earned the programme a good deal of praise on Twitter, along with requests for more historians to be invited!

Naturally, a number have disputed some of Sir Antony's statements - interestingly from more than one side. On one side there have been people saying he's not a proper historian for saying that Catalonia was a "country" until the early 18th Century (something they strongly deny was ever the case). On the other side there have been people denouncing him as an "Establishment historian" who is belittling the Catalan independence movement by saying it's losing support and that last week's declaration of independence was provoked by panic. And, opening a third front (so to speak), some communists have denounced Sir Antony for 'lying' about the massacre of Trotskyists by communists during the Spanish Civil War saying, "It was never the case" (even though it was Andrew who first raised the point).

Anyhow, baring all of that - or none of that - in mind, here's the transcription. I suspect, from the questions and the answers in the closing section of the interview, that those who favour the Catalan independence cause will be less pleased about this interview than those who oppose the cause. Those 'urgent' Catalan independence supporters (as AM described them) are apparently heading for collapse and the Spanish are handling things as well as such things can be handled. And people have 'a lot to lose' from a Catalan breakaway (as AM put it). 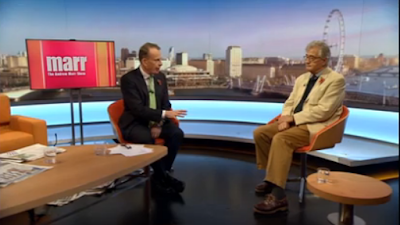 Andrew Marr: Now, we've been talking, as you've just heard, about Catalonia. We all understand that this is now a confrontation between Madrid and the northern separatists, but what can be difficult to remember is just why feelings run so deep. This goes right back to the 1930s. Many people will remember George Orwell's Homage To Catalonia. He was describing his time fighting for th anarchists in the Spanish Civil War. And I'm joined now by one of this country's prime historians of that war, Antony Beevor. Welcome, Antony Beevor.

Andrew Marr: Can we start off for people who don't understand the history of this a little bit about why the Catalans feel separate?

Antony Beevor: Well, the Catalans did have their own country and even their own mini-empire back in Medieval times, and it was only really from 1716, after the War of the Spanish Succession and the great siege of Barcelona in 1714, that they were fully brought under the control of Madrid. And it was the first Bourbon king, Philip V, who actually brought this to pass, and this is why they're very reluctant to accept the rule of the monarchy.

Antony Beevor: Well, it was, and in fact Franco and his generals thought that they would win Barcelona easily but in fact the most desperate fighting took place in the first days, in July 1936, when the generals tried to take over, and they were defeated basically by the anarchists, but also by the POUM, who were sort of semi-Trotskyists who George Orwell was fighting with.

Andrew Marr: Yes, absolutely. And that's the same period when there were terrible massacres of left-wing Trotskyists and anarchists under Stalin...

Antony Beevor: By the communists...

Andrew Marr: By the communists, based on Russia. So a lot of fighting. And these divisions go deep into Catalan society. Which side were you on in the war? I notice that a lot of people mention that Mr Rajoy, the prime minister in Madrid came from a pro-Franco family, for instance, whereas the Catalan leader came from the other side. So these are still deep divisions inside Catalonia?

Antony Beevor: Well, they are deep divisions really throughout Spain. You find so many families where one side came from Franco's side and the other side came from the republican side.  But for the Catalans, I think the most appalling crime of all was the way that the Gestapo handed over the president of the Generalitat, Lluís Companys, to Franco, and he was then executed in 1940.

Andrew Marr: We think of fascist leaders as being 1940s characters, but actually, of course, in Spain it goes much, much later, right up to the 1970s. And after he wins the civil war, Franco really represses Catalan autonomy or independence, doesn't he?

Antony Beevor: Yes, as with the Basque Country as well. He did not want any form of separatism in any part of Spain. And that is also one of the reasons why after Franco's death it was terribly important with the constitution of 1978 for there to be a certain reassurance, shall we say, to the army about the centrality and the unity of Spain.

Andrew Marr: Absolutely. And now we're in this situation where it's all thrown into alarm again. What are your reflections? You know Spain very, very well, and what is happening right now, and the urgency with which the Catalans seem to be demanding independence.

Antony Beevor: Well, what one is seeing, to a certain degree, is that the urgency is actually prompted by the fact that they are losing support for independence. The latest poll shows that actually it is 55% against and only 41% or 42% in favour of independence. And they know they're losing control and this is why there's that much more of a push over recent days.

Andrew Marr: I was reading another historian, I won't say the name, another historian who was suggesting in yesterday's papers that Spain might be on the brink of actual violence and the beginning of a Yugoslav-style break-up.

Antony Beevor: I don't think so. I don't think we're going to see a sort of Catalan version of Eta emerging or anything like that. I'm always rather alarmed in Spain when journalists say, 'Are we facing another Spanish Civil War?'. The conditions are totally separate. I really don't think that...I think Spain is a very mature democracy. I think they probably handle things as best they can in the circumstances.

Andrew Marr: And of course Catalonia is a very wealthy part of Spain. People have a lot to lose.

Antony Beevor: Well indeed, and this is rather like, say, the Northern League in Italy and other independence movements, who are much more interested in paying less taxes. I think on the whole many of the historical arguments tended to be used, if you like, as an emotional support to basically what are rather self-centred (quite often) reasons for independence.

Andrew Marr: So we're in a kind of 'Read the book, don't look at the crystal ball' moment but, nevertheless, at this moment what would you expect for the next few moves?

Antony Beevor: A fragmentation. But also, I mean the very fact that you've got 55% supporting the central government and its call for elections means, I think, that we're going to see a calming of the situation, rather than a threat of another civil war, far from it.

Andrew Marr: Antony Beevor, it's been great talking to you. Thank you very much indeed for coming in.
Posted by Craig at 17:16