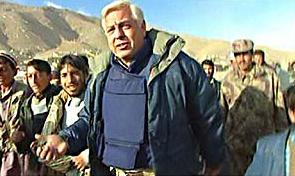 His remit was to discuss the key global shifts that have taken place over the sixty years since Today began broadcasting in 1957.

You might have expected the collapse of the Soviet Union and of communism in Eastern Europe to have featured, and the rise of Islam as a serious threat to world peace to get a mention, but neither of those appeared here.

Still, he was as interesting as ever on China, told a neat anecdote, and his personal reflections on Britain and America in the 1950s were striking (to say the least).

As you may recall, he got into a spot of bother recently for moaning that Britain "no longer feels like (his) country anymore". Well, if this is anything to go by he didn't feel at home in this country back in the 1950s either (a fascinating angle into a way of thinking that is quite alien to my own. I've never felt like rejecting my own beloved country. Cue strains of Vaughan Williams)...

....and as for present-day America, well, don't even go there sister!:

Mishal Husain: Well John Simpson, as the World Affairs Editor, has had the task of interpreting many of those events for BBC audiences here and around the world, and he's with us now in the Wigmore Hall. John, there's a difference between how we see the big moments and how overwhelming the big news stories can seem at the time, and the benefit of being able to look back over 60 years so, so what are the key shifts do you think in the time that this programme's been on air, globally?

John Simpson: I suppose the most important one is is what's happened to the United States. I went to America first not in '57 but five or six years later, actually just a few months before the assassination of President Kennedy, which I think was the trigger for the kind of slow descent of the United States. You cannot believe how far ahead of the world, the rest of the world, America was at that time, in every single way, and so far ahead socially compared with a place like Britain. I remember thinking...I was a young teenager...I thought, "Whatever is the point of going back to Britain? It's like going back to the Middle Ages from here", and it was only because my visa ran out that I did come back. I think I would have stayed. You do not feel that now about the United States, a country where there are so many child brides, where executions are frequent and barbarous in many states. It's all changed.

Mishal Husain: And in terms of what was happening here at at that sort of time in...Britain was in the process of giving over its colonies, so many countries being independent around the world. The Middle East was if not in turmoil certainly pretty dramatic then, as it is now?

John Simpson: Yeah, I mean I suppose you could say the Middle East is one area which is recognisably the same as it was back in 1957, still no real sign of a solution; in fact the very notion of the solution seems further away than it did, well, perhaps not in '57, but than it did 20 years ago. Yeah, I mean, things have changed hugely in the rest of the the world. 1957, European colonialism was still quite a powerful force and large parts of Africa, parts of Asia, still run by by colonial forces. And a good friend of mine went in for a job as a colonial officer in Africa in about that time and he said, rather nervously, "Will Britain still have an empire in Africa?", and man who interviewed him, the grandee who interviewed him, said, "I can assure you you will still have a job by the end of the century", and he was out of it within a few years.

Mishal Husain: Not just a difference but a transformation's been what we've seen in China in that time, and that's something you've reported on a lot. As you look forward is this the century that is, if not China's, then certainly Asia's century?

John Simpson: Well, I mean, that must be, I suppose, the likelihood. It's just I've got my doubt about it, that the doubts which I've had, because I watched the massacre in Tiananmen unfold in front of my eyes...I've never been able to forget that...but I've always had a slight doubt about China's ability to kind of develop and extend its political thought beyond just the immediate political needs. And now, you know, just in the last few days, President Xi Jinping has taken effectively sole control, his thought is being taught in universities, and it looks to me like, perhaps, storing up trouble for the future.