Returning to a topic we looked at last month... 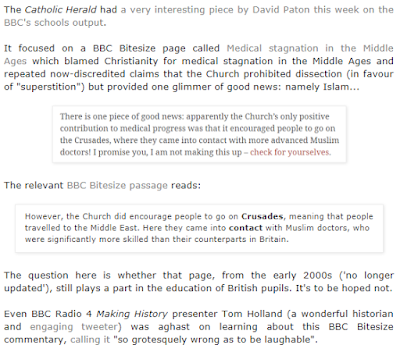 David has contacted me with an update (for which many thanks). Following his complaint to the BBC, BBC Bitesize have now updated their page to remove their grotesquely wrong claim that the Church banned dissection.

Incidentally, it turns out that the Bitesize page I was looking at was an archive version. The live page had exactly the same statements. So, yes, British pupils were still being fed this false claim by the BBC right up until a few days ago.

It's excellent that the BBC corrected this mistake following David's complaint  (after some fifteen or so years) but - as you'll see if you read the latest version - the overall bias of the page remains, including the closing 'cultural cringe' towards Islam.
Posted by Craig at 11:35