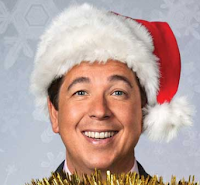 The BBC is pleased (with itself).

According to The Times, they beat ITV all hands down this Christmas, ratings-wise, taking 9 out of 10 of the places on this year's 'most-watched programmes on Christmas Day' list.

Charlotte Moore, director of content at the BBC, said: “We’re happy so many people chose to watch BBC One. We want to offer something for everyone.”

That said, not that even the highest-rated programme, Michael McIntyre’s Big Christmas Show, with 6.1 million viewers, got anywhere near the kind of viewers that Morecambe and Wise got in 1977 (28 million) but, of course, there's vastly more choice nowadays.

The BBC will be much less pleased if they read the comments below the Times article though. It's a long list of complaints about how unimaginative, how PC, how rubbish, the BBC's offerings were this Christmas.
Posted by Craig at 06:31