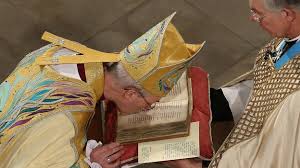 I will admit to not being the world's biggest fan of Thought for the Day - the Today programme's daily offering of religious wisdom from across the (liberal) world of faith. (Non-believers need not apply).

I know I'm not alone in that. Even the new Archbishop of Canterbury, the likeable Justin Welby, admitted to Evan and Sarah that it wasn't something he felt inclined to listen to very often either.

Justin might, therefore, share my affection for a wonderfully witty Twitter feed dedicated to encapsulating the wisdom of every Thought for the Day talk in no more than 140 characters.

Blog favourite Damian Thompson of The Daily Telegraph (another non-fan of TFTD) brought it to the world's attention:

Talking of religion-lite, I’ve found a way to enjoy Thought for the Day. A Twitter account called @TFTDAbridged fits the daily messages into 140 characters. I don’t know who writes it, but he or she captures their profundity. “A new year is like a new exercise book. Christianity isn’t like a new exercise book, but forgiveness totally is.” “People argue about things, which means Pope Francis is totally like Nelson Mandela.” “Science is pretty good but it totally doesn’t explain religious stuff, so religion is right about stuff, just like my dogs.” And my favourite: “Marathons are totally like pilgrimages. Marathon runners are totally like Archbishop Desmond Tutu.”

The Twitter feed can totally be found here, at TFTDAbridged.


Archbishop Justin's own (so far one-and-only) Thought for the Day, broadcast on Good Friday, was crisply (and fairly) encapsulated thus:

What's happening in Cyprus is a perfect opportunity to talk about Good Friday and how amazing Jesus is. Am I right?

Labels: 'Thought For The Day'