Craig alerted me to this, so hat tip to Craig. It’s Jon Donnison again. Groans and sighs please..
It's at about 40:50 in, on this link, which is to yesterday's Eddie Mair's PM programme. It's another one about a Palestinian student -  from Gaza - a topic that is in danger of becoming one of Eddie's favourites?

"There are 7 universities in Gaza" announces Jon. "Palestinians put a high value on education" opines he.  Ingratiatingly, opines me.  [...........]"adventurous is a word to describe what it's like here. We've had an Israeli airstrike and Palestinian rockets being fired in the other direction.."

See more on "what it's like here" in the highlighted quote in the BBC's online article, and below, at the tail end of this piece. 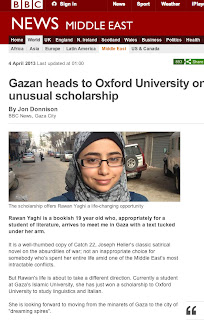 "Rawan Yaghi is a bookish 19 year old who, appropriately for a student of literature, arrives to meet me in Gaza with a text tucked under her arm.It is a well-thumbed copy of Catch 22, Joseph Heller's classic satirical novel on the absurdities of war; not an inappropriate choice for somebody who's spent her entire life amid one of the Middle East's most intractable conflicts."

What can you mean Jon? Is your reference to 'the absurdities of war' a not-so-subtle way of  disparaging you-know-where? Or is it a double bluff, and a veiled (pun intended) criticism of the absurdity of Hamas’s intractable rejectionism?

That’s quite unlikely, bearing in mind that you’re about to give a platform to another of these caring, immature left-wing pro Palestinian students who get a thrill out of meddling in political issues they don’t understand. 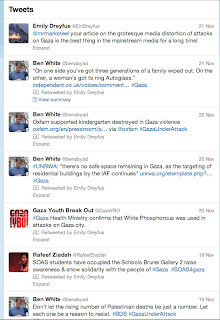 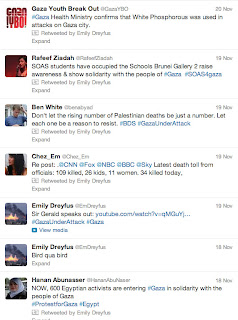 Ms Dreyfus is hanging out with some dodgy mates on the Twitterverse - she seems to have  been “radicalised” by people like Ben White, and the BBC's  Mark Steel, who wrote this Jeremy-Hardy-like piece in the Indy in which he uses ridicule to defend Hamas’s policy of hiding amongst civilians, i.e. using them as human shields.

"The reason so many get killed, says Benjamin Netanyahu, is that Hamas “hides behind civilians”. Because it’s the duty of anyone who gets assassinated to make sure they’re in a clear, open space at all times so the cruise missile aimed at them doesn’t bump into anyone else. That’s basic health and safety, that is.”

Ha ha, very witty. He might as well jest: “Because it’s the duty of Hamas to mingle with the public they can’t be picked out as targets.” or: “Soldiers, what are they like? Sitting targets! They march around, all dressed the same, instead of mingling with the public dressed as nuns and schoolgirls so the enemy can’t tell who to attack.”

That line of wit is sooo Jeremy Hardy.  Combining ill-thought out political posturing with exaggerated emotive imagery for effect.  The image, like an aural version of a Steve Bell ’cartoon’, is of a “cruise missile" indiscriminately obliterating bystanders willy-nilly.  Israel may well have that capability, but the very fact that they do ‘target’ with precision is lost in the fog of witticism.

Mark Steel has made a cruise missile of a witticism. A ‘joke’ that inflicts collateral damage but misses the target altogether.

“She is currently completing a degree in English literature studying, among other books, George Orwell's Animal Farm and William Golding's Lord of the Flies.She says her favourite book is Mornings In Jenin by the Palestinian American writer Susan AbulHawa.The novel follows the story of three generations of a Palestinian family who became refugees after the creation of the state of Israel in 1948.Rawan is also a fan of JK Rowling, author of the Harry Potter books.”

Her Oxford education could cover a multi faceted spectrum of material. (Unless she’s scooped up by the radical left.) If it does, maybe her time there will be for the best. If Emily and her co-Tweeters get hold of her, not so much.

Talking of double edged insinuations, here’s a highlighted quote from that piece:

“Most people think [Gaza] is like a war zone and that everyone here is really depressed and involved in politics. But it's not always about war. It's also about families, friends and love”

This may well be the case, but I’m not convinced that this is a complete representation of “what it’s like”. What about the less “loving” aspects of fundamentalism that Hamas enforces, which Donnison appears not to notice, or downplays?

What would Mark Steel have to say about Gaza’s policy on educating girls?  Perhaps he would say:
“The reason we’re banning men from teaching girls,” says Hamas, is that  we’re doing what serves our people and our culture” Because it’s our duty to stay away from lady students whose close proximity might make us rape them? Because it’s our duty to Islamise, first  Gaza and then whole universe?
I don’t think so. What witty jest would Mr. S have to make about this little snippet:

"Last month it was also reported that children at Hamas-sponsored schools were also being offered voluntary weapons training. When they turn 18, children in Gaza are eligible to join the military wing of Hamas."

Who is responsible for making people think they know what Gaza is really like? Why, the BBC.
Posted by sue at 12:00