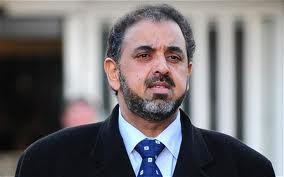 The Commentator highlights a remarkable reply to one of its readers from the BBC Complaints department.

The reader had complained about the headline the BBC News website article about Lord Ahmed, a Labour peer suspended for making anti-Semitic accusations that Jews were responsible for his prison sentence following a fatal motorway crash:
Labour peer Lord Ahmed suspended after 'Jewish claims'

The reader complained that the BBC's headline avoided the correct word - 'anti-Semitism'. Others complained that the headline was also confusing - i.e. that it might easily misled readers into assuming that 'claims made by some Jewish people' had resulted in his suspension.

The BBC Complaints department has explained why that headline was used. (I think I should have put the word 'explained' in inverted commas there. Hope you're not drinking something as you read this, or your computer screen could be drenched any second now!)

Thanks for your email and please accept our apologies for the delay in replying. We try and stick as closely as possible to the words used, so, in this case we used 'Jewish claims' in the short space available for headlines to summarise his comments.

The reader's response to that is an entirely fair one:


Thanks for your reply, but with all due respect that is utter nonsense. 'Jewish claims' 13 characters. 'Antisemitism' 12 characters. Plus one look at the space available in the headline within the URL will tell you that there is/was PLENTY of space to report factually. To say that the misleading and inaccurate headline was due to space available is provably wrong. This is not an acceptable response . Please explain as I am considerably unhappy at the dishonest response you have provided.

The bit the Commentator doesn't pick up on in the BBC's reply is "We try and stick as closely as possible to the words used." The words used, checking back, were in fact 'anti-Semitism':

The Labour leader Ed Miliband later said: “I think that the comments reported by Lord Ahmed are disgraceful comments.


“There's no place for anti-semitism in the Labour Party, and frankly anybody who makes those kinds of comments cannot be either a Labour lord or a Labour member of Parliament.” (Independent)

In a statement, the Labour Party said it "deplores and does not tolerate any sort of racism or anti-Semitism". (BBC)

Even that part of the BBC Complaints department's reply doesn't ring true then.
Posted by Craig at 14:49