The Iron Lady and the BBC (Part Three) 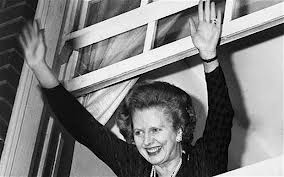 There have been some interesting opinion polls on the subject of Margaret Thatcher in the last couple of days. The YouGov poll for The Sun showed 52% expressing the opinion that she was a "great" or "good" prime minister, as against 30% saying that she was a "poor" or "terrible" prime minister. This result was echoed by the ICM poll in The Guardian which showed that 50% of respondents though that her rule had been good for Britain as opposed to 34% who thought it had been bad for Britain. The nation may still be strongly divided over the late prime minister, but it seems that it's far from being evenly divided. It has a pro-Thatcher bias.

...which leads me to a final review of Radio 4's coverage of Baroness Thatcher's death.

I'll make it (fairly) brief, as fatigue might begin to set in. I wouldn't want to wear you out...or wear myself out...over this. As Is the BBC Biased? favours longer-term reviews of the BBC's output, I think a review of a third day of its coverage is fully in keeping with the blog's spirit. Then enough will be enough.

This was the first day when critics of Margaret Thatcher outnumbered supporters. Still, it remains hard to make much of case that this is evidence of BBC bias - especially given that her supporters have outnumbered her critics on the two preceding days of coverage - and the critics today only outnumbered the supporters by one person.

Today largely dealt with other matters. It closed though with a discussion anticipating this afternoon's parliamentary debate on Mrs Thatcher, set up between Ronnie Campbell, a Labour MP who has always been bitterly opposed to her and who refused to attend, and the Conservative MP Conor Burns, one of the lady's friends. Mr Campbell said he wasn't glad she was dead and condemned those celebrating her death, but he was resolute in his determination not to attend. This segments suggests that the BBC is getting back to business as usual, favouring political argy-bargy over personal reflection. It offered a balance of guests and Justin Webb interviewed them fairly.

The World at One also reverted to its familiar format when dealing with the subject of the recall of parliament - the format where a government minister is asked to respond to two or three critics, heard prior to the government minister. Here we heard from Tessa Munt, a Liberal Democrat MP who (like Mr Campbell) opposed the recall of parliament today and didn't attend the debate. She was followed by Giles Fraser (who should need no introduction to Radio 4 listeners) raising concerns about the use of St. Paul's Cathedral for the funeral given that Baroness Thatcher is "a very, very divisive figure". "It is problematic", he said. Then, as the format demands, Francis Maude - who is chairing the committee organising Baroness Thatcher's funeral - come on to respond to their criticisms. Bias? Or just the airing of two relevant points that a government minister might be expected to answer? I'm not sure about the relevance of Giles's contribution but Tessa Munt's was surely appropriate, wasn't it? [I'm restraining myself from moaning about the inevitability of the invitation to Giles Fraser here!] I can't criticise Martha Kearney's questioning either, as it was appropriate to each guest.

Later, on the 15th anniversary of the Good Friday Agreement, there was an debate between Conservative peer Lord Trimble and Sinn Fein-affiliated writer Danny Morrison. As you would expect, Mr Morrison was sharply critical of Mrs Thatcher (especially over the hunger strikes). David Trimble was kinder. Unexpectedly, there was agreement between the two guests that she got it wrong over the Anglo-Irish agreement. Unless you believe that anyone who was once a member of the Provisional IRA (as Mr Morrison was) should not be given the oxygen of publicity (and some still do), then this was surely fair enough.

Please take a listen to BBC reporter Carole Walker's review of the debate for PM and see what you make of it. There was a clip of David Cameron, praising the late prime minister. Then she listed a number of the bad points made about her record by Ed Miliband, followed by a more emollient clip. [From what I've read elsewhere about Ed's speech, she does seem to have accentuated the negative here]. She then quoted the disapproving (and absent) Ronnie Campbell, and then featured a clip of an attack on Lady Thatcher's record by another Labour left-winger Michael Meacher. A further attack from Angus Robertson of the SNP came next. Except for that clip of David Cameron, the contributions of no other Conservative MPs were featured, no defences of her record in the House of Commons. This seems unusual, given how many Conservative MPs made speeches. She then reviewed the debate in the Lords, with a critical but respectful tribute from Baroness (Shirley) Williams, followed by a highly personal tribute from Lord Tebbit, with a humorous anecdote from Malcolm Rifkind to finish. Those BBC bias filters I tend to see through often go into overdrive when Carole Walker is on, so I may be reading too much into her report. I've just heard the BBC's Robin Brant on The World Tonight's new bulletin and he too favoured the sharpest critics in his account and in his subsequent review for the programme.

She was followed on PM by the Telegraph's Charles Moore (a fan of Mrs T) and the Guardian's Simon Hoggart (not a fan of Mrs T), who gave their contrasting takes on today's debate in parliament - which was fair enough. Charles Moore blasted the BBC towards the end, after Eddie Mair raised the possibility of Ding Dong! The witch is dead becoming a big hit on Sunday. Mr Moore said that the strain of their decent initial coverage has proved too much and that they were now going around calling Mrs Thatcher "divisive". Simon Hoggart (of the Guardian) leapt in to defend the BBC, noting that he'd just heard a Conservative MP (John Whittingdale) describe her in just that way  - just as I heard Conor Burns MP use it repeatedly on Today this morning - and that it wasn't just the BBC. Eddie stayed silent.

As for The World Tonight, it followed the path of Today and The World at One in raising questions. Here the question was, is the military funeral for Lady Thatcher "appropriate" or is it "excessive"? Or as the programme's Twitter feed puts it:

The issue was debated between the Guardian's Jonathan Freedland (who finds it excessive and is opposed) and Danny Finkelstein of the Times (who finds it appropriate and is in favour).

So, as you can see, the BBC's tone may have hardened today - in terms of the kind of debates Radio 4 broadcast -  and it has certainly become more questioning, but the balance of points of view has still been carefully brought about and I haven't fond any evidence of biased interviewing on the part the BBC presenters. (Even Eddie's question about that song can be justified). A quibble over Giles Fraser's contribution and a nagging suspicion about Carole Walker and Robin Brant's coverage is all I've got really.

Of course, Radio 4 is only one corner of the BBC's output. It's the one I chose to cover (as it's manageable  in terms of scale and easily accessible). The coverage on the BBC News Channel,  BBC Breakfast, the main BBC One bulletins, Newsnight, Radio 5 Live, the World Service, etc, may have been very different. If so, hopefully someone will have been monitoring it closely and will present the evidence on a blog somewhere (here even).  The more eyes there are on such coverage, the better picture we'll get of it.

UPDATE 1 (11 Apr): The debate continues. According to a report in the Guardian:


Thatcher death coverage prompts competing accusations of BBC bias
BBC receives 268 complaints saying coverage biased in favour of Thatcher, and 227 saying it was biased against her
More people have complained that the BBC's coverage of Baroness Thatcher's death was biased in favour of the former prime minister than against her, the corporation has revealed.
The corporation has come under fire from critics such as former Tory MP Louise Mensch who accused the BBC of putting a "spin" on Thatcher's "divisive" legacy.
The Daily Mail – no stranger to criticising the BBC – also highlighted viewer and listener complaints about the corporation, saying the BBC had been accused of "disgraceful" bias.
However, the BBC said on Wednesday it had received 268 complaints that its coverage was biased in favour of Thatcher, and 227 who said it was biased against her.
A further 271 people complained that the BBC had devoted too much airtime to the former Tory leader's death.

UPDATE 3: The Telegraph's Ed West tweeted this snapshot of the BBC website in the early hours of yesterday morning, commenting "Nice warm glowing Thatcher coverage from the BBC": 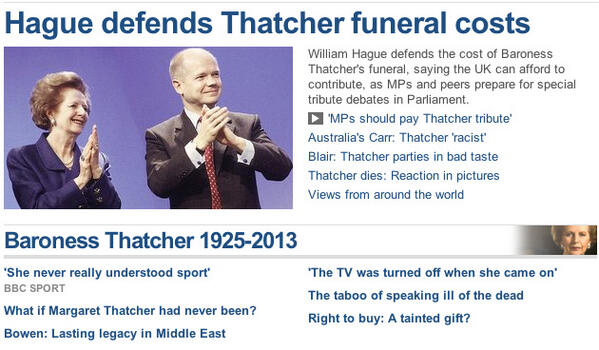