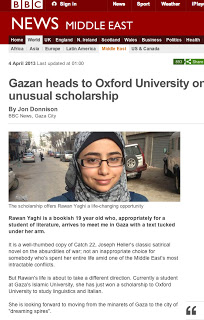 Rawan Yaghi isn't quite the bookish, apolitical innocent Jon Donnison's article makes her out to be.

She has her own Twitter feed which shows a rather different side to her:

Plus she also posts at the left-wing anti-Zionist site Mondoweiss:
http://mondoweiss.net/author/rawan-yaghi


So it transpires that bookish, not-quite-as-apolitical-as-we-were-led-to-believe Rawan is fêted by pro-Palestinian activists - whether at Mondoweiss or at Oxford University.

Not quite the story Jon Donnison was telling.

Sue:  Ha! My remark about the poor girl being scooped up by Emily and her friends seems decidedly generous and extremely stupid now. Who'd a thunk it as they say on the interweb.

As far as I can see Rawan Yaghi's blog is a stream of victimhood tales. Creative writing. I suppose one can't criticise her for wallowing in 'war is horrid', but there's a limit. She hasn't tackled the politics as far as I can see.

Mondoweiss is a different story. Her kind of article is just the ticket for people who are content to exploit the  'war is horrid' theme as an argument against Israel.

The BBC seems to be becoming more biased rather than less.
Posted by Craig at 19:58