Alo and Здравейте! ('Hello' in Romanian and Bulgarian) 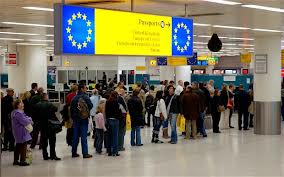 During my lunch hour at work on Monday, I clicked into the BBC News website and saw the prominently-featured headline Few planning to migrate to UK - poll, concerning a Newsnight survey about possible immigration to the UK from Romania and Bulgaria from 1 Jan 2014. The headline had changed to Polls: No indication of huge Romanian-Bulgarian influx by the time I'd got home, but you can still see the original headline on the link provided by anticipatory piece posted the night before.

Having read the BBC article and its 'nothing to worry about, folks!' headline, I then clicked into the Daily Telegraph site to find it had posted its own response to the BBC survey, headlined Nearly 350,000 Romanians and Bulgarians could be looking for work in the UK, a new poll has suggested. It was its lead story at the time and shouted 'plenty to worry about, folks!'

The contrasting kinds of spin put on the Newsnight survey by the BBC and the Daily Telegraph could hardly have been more different then  - the BBC saying the survey suggests that "few" Romanians and Bulgarians are coming. while the Telegraph was interpreting it as suggesting that a huge influx of Romanian and Bulgarians is coming after all.

The statistics provided by the respective articles further enhanced the differences of emphasis.

The BBC report said that 1% of Romanians said they were looking for work in the UK in 2013 or 2014 ("very small numbers of people", according to BBC reporter Sanchia Berg), with 4.2% of Bulgarians saying they were so doing. That doesn't sound too scary, does it?

The Telegraph, however, took the obvious next step of translating those percentages into actual numbers -     153,000 Romanians and 196,000 Bulgarians, totalling nearly 350,000 potential immigrants in total. Now that's a lot of people! Indeed, that's massively more than the 50,000 a year that Migration Watch have been predicting.

The Telegraph followed their article up that same evening with another entitled BBC accused of 'spinning' figures on Romanian and Bulgarian migrants. The article noted that

"the BBC did not convert those percentages into potential numbers of migrants and said they showed that “very small numbers of people” in the two countries are considering moving to the UK."

This wasn't quite right, as that "very small numbers of people" phrase only referred to Romania; however, the Telegraph was absolutely spot on in querying why the BBC hadn't converted those percentages into actual numbers.

“It looks to me as though the BBC is using very heavy spin on their polling figures. Quite frankly their headline simply does not match the results they have been given.”

Philip Davies, the Conservative MP for Shipley, was also quoted, making a point that many of you will recognise:

“I don’t see why we should be surprised because the BBC has a track record of not being impartial and giving us their own political bias.”

The BBC denied “spinning” the headline figures and insisted that it had been “clear” in its reporting. “We have been clear in our reporting that the surveys are a snapshot of opinion and that people’s intentions may change,” a spokesman said. “It is difficult to see how any of this constitutes spinning.”

Actually, I'd say it's very easy to see how that headline and the failure to convert those percentages might constitute spinning!

Migration Watch certainly believes the BBC to have been spinning:


This is a stunning survey, which the BBC has rather desperately tried to play down. The percentages look small but when multiplied by the size of the work force they produce large numbers.

That night's edition of Newsnight itself didn't go in for such overt spinning (despite how it frames the feature on its website) and it gave voice to a range of perspectives on the issue. It was, however, left to Paul Nuttall of UKIP to bring up the 350,000 figure.

The estimates for actual numbers have ranged from a mere 13,000 (the then Labour government's estimate), through the more recent NIESR figure of 21,000 and Migration Watch's 50,000 now reaching Newsnight's 350,000. We are still very much in the dark it seems. No one knows how many will come and Sanchia Berg herself was very careful to urge caution over the BBC's survey, especially given its small sample. Given the last wave of immigration from Eastern Europe was massively underestimated (except by Migration Watch), many are understandably assuming that the totals from Romania and Bulgaria will prove larger rather than smaller than expected. But as high as 350,000? (350,000 to 400,000 has been UKIP's best guestimate for some time). The Romanian and Bulgarian ambassadors themselves predict up to 35,000 migrants. We will see.
Posted by Craig at 21:00