It might look as though I spend my sad life trawling through Twitter, but I promise I don’t.
I do however spend (too much) time scouring other websites and blogs, and I get this irresistible urge to regurgitate things, but with a twist.
“Yes chef; with a tweest.”
I was sorry to see that Jon Donnison has been nominated for an award. No, he hasn’t been awarded the honour of cooking for the banquet, but for ‘radio Journalism of the Year’. Obliquely, it is for a kind of cookery, namely cooking up yet more animus towards Israel as if we hadn’t enough of that already.
I’m beginning to see bizarre similarities between programmes like the Great British Menu and the type of reporting Jon Donnison represents, and that’s why certain references have crept into this narrative, and why I’m about to go off at a small tangent.

Is there dissonance in the concept of the Great British Menu for Comic Relief, a banquet for the delectation of celebrities?
Imprisoned in the straightjacket of its format, stultified by repetitive shots, the clunking predictability of the excruciatingly irritating suspense before we hear which contestant’s incredible journey is about to end. The melodramatic disaster; the blast freezer hasn’t blasted, the spray-gun has jammed, the mixture has curdled and the chef will have to start again from scratch.  This year’s tacked-on comedy agenda made it even dafter.   Can gastronomers evaluate comedy? No, and co-opting some ‘funny‘ judges made it worse.  The actual food has boldly gone to the land where the bong tree grows. Take a crate of prime produce. Torture till unrecognisable. It’s food Pru, but not as we know it. An iridescent smear, a small glistening lump, some pureed piped dots set on a huge plate, two tiny pea-shoots artfully placed with trembling hand.
“I want this more than anything”  all mashed together into a meaningless blob of TV mush. The GBM, and all its clones and spin-offs have been done to death. They’re long past their use-byes. The life has been sucked out.   Everyone but the programme makers know this.

Perhaps Jon Donnison is also imprisoned in a straightjacket, stationed in Gaza with Hamas breathing down his neck. But that doesn’t account for the gratuitous underhand digs at Israel, the permanent undercurrent of innuendo and antisemitism, with a twist.

Take the story we blogged the other day, further expanded upon by BBCWatch. A story whose ingredients have been meddled with and spun till they’re all but unrecognizable.
Following a link from somewhere on the blogosphere I happened upon Jeremy Bowen’s Twitter page, where I couldn’t help spotting this
“Worth reading from the BBC’s excellent Jon Donnison on a remarkable opportunity for a Palestinian woman from Gaza.” 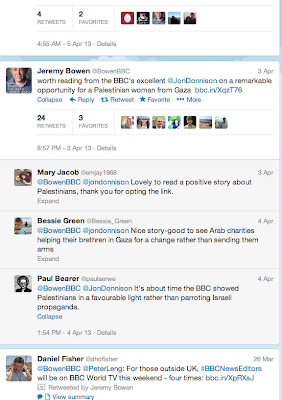 Is Jon Donnison excellent?  Paul Danahar thinks he’s excellent and he’s nominated him for an award. Obviously Jon excels at deception and sleight of hand, which doesn’t matter to the programme makers who believe they’re onto a winner. But it does matter to the world because distorted presentation colours the perceptions of cats, kings and governments.
“A remarkable opportunity for a Palestinian woman from Gaza.”
Indeed, it is a remarkable opportunity for Jon Donnison to present an anti-Israel activist and her benefactor, who is actually another activist and fanatical Israel-hater - as a couple of innocent girls. And an opportunity to insinuate that the latter has selflessly campaigned for the merciful release of the former, from Gaza, which the BBC routinely and mischievously presents as a prison, and to disseminate the deception that Israel is responsible for the crimes of Hamas.
The implication is that the beaming, exceedingly grateful heroine, having been rescued from the shackles of Israel’s imprisonment is about to enjoy new horizons, enlightenment, liberty and freedom.

But this is not likely to be the case, is it? The reality is that at Oxford she will be enveloped by well meaning BBC-misguided pro Palestinian anti-Israel sympathisers and campaigners to be used as another useful tool in the arsenal of the Israel-bashing fraternity.
BBC Watch:

“Donnison’s transparent use of this ‘human interest’ story as a hook upon which to hang promotion of the standard, monochrome BBC theme of plucky Palestinians battling an all-powerful Israeli oppressor totally ignores – as usual – the fact that restrictions on travel into Israel from the Gaza Strip for students and others would not be necessary were it not ruled by a terrorist organization committed to conducting  war against its neighbours.”

Jeremy Bowen must have known about Rawan Yaghi’s involvement in anti-Israel activism, yet he too is promoting this deception. He may as well add *innocent face* to his Tweet, like Sally Bercow, though her Tweet got her into trouble, and Bowen seems to be immune from criticism. The BBC is using a tired worn-out formula, ignoring the increasingly obvious insanities of  the Islam-fuelled 'Jew-hate' that lies at the heart of the Middle East conflict. Presenting a massive deception, the BBC is amongst the last and the slowest to recognise what is happening out there in the real world and still churning out the same old same old.

They can nominate each other for all the awards they like - it’s what nepotism is all about, but misleading, deceptive reporting is not something to be proud of.

BBCWatch. “Until it begins to inform audiences of the responsibilities of the Palestinian leadership for the situation of its people, the BBC will not meet its obligations on accuracy and impartiality.”