The end is where we start from 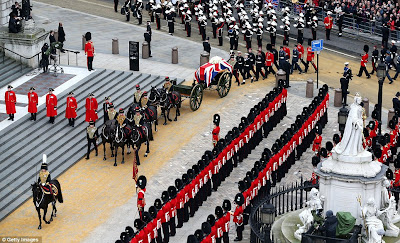 As I'm recording the day's coverage on the BBC News Channel for later scrutiny, this post will merely provide a few initial impressions of the big event - the funeral of Baroness Thatcher - or, more accurately, the reactions of others to the BBC's coverage.

I always keep up with the comments at Biased BBC. I was amused today to see these two comments come in within a minute of each other:

Submitted on 2013/04/17 at 3:35 pm - BBC coverage of state occasions used to set the benchmark. something somewhere went wrong. I think at heart the BBC discovered that it was no longer patriotic. State occasions became events to be viewed with a satirical wry commentary. This morning Dimbleby was ill informed and sarky in tone.

Submitted on 2013/04/17 at 3:34 pm  - I was moved by the funeral (which I watched live on the BBC HD channel). It really did look like history in-the-moment and it was a respectful, quietly impressive ceremony – the sort of thing this country does so extremely well when it actually wants to. The BBC refrained from any petty political point scoring throughout the coverage. Even Dimbledore somehow acquitted himself well in the proceedings.

As well as these differences of opinion at Biased BBC there were also sharply different reactions on Twitter concerning the BBC's coverage of Lady Thatcher's funeral.

At (right-leaning) Biased BBC the prevailing opinion was that the BBC got it wrong, and that the coverage was anti-Thatcher. Searching under 'BBC bias' on Twitter (which will automatically deselect all those millions of people who aren't objecting to 'BBC bias') and then counting (as I'm wont to do!) you will find a similar difference of opinion on Twitter - albeit, as at Biased BBC, a far from even split. A clear majority of Twitterers, however, are complaining about pro-Thatcher bias from the BBC, with considerably fewer people complaining about anti-Thatcher bias (though there's been a recent upsurge from that side of the argument). Twitter, however, is not necessarily representative of anything other than the Twittersphere. Just like blogs.

A classic moment (which also made me smile) came when these two tweets popped up within about a minute of each other, both reacting to David Dimbleby's interview with David Cameron just before the funeral:

Mike Freeman ‏@LabourSaleMoor
If you think the #BBC has a left bias just look at #Dimbleby's performance today! Unashamed true blue love in with #Cameron #nauseating 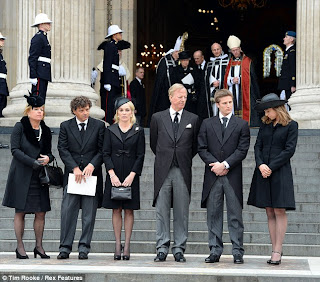 Does that mean the BBC got it about right (as they themselves have a habit of saying)?

Well, I only watched the coverage of the funeral itself (plus the progression of the cortège) and found nothing to object to in terms of BBC bias. David Dimbleby did his usual fine job on such occasions.

Being an admirer of Mrs Thatcher though, my own personal biases might (I suppose) be coming into play here. As I was appreciating and being moved by the funeral itself, maybe that also means that the coverage was pro-Thatcher (working on me unawares)? Or maybe I was reacting more to the pomp and ceremony of the funeral (the military precision, the horses, the applause of the large crowds, the beauty of the music, the granddaughter's reading, the gorgeous Anglican ritual, the Bishop's sermon, the Queen and the Duke, the bells of St. Paul's ringing out, etc, etc, etc) as well as to my own affection for the memory of the idolised prime minister of my youth and, thereby, may have been filtering out the loaded anti-Thatcher commentary being (allegedly) supplied by David Dimblebias?

Well, I don't think that's the case. I am always wearing my BBC-bias-tinted spectacles after all and seem to be incapable of watching events like this without thinking about whether the coverage is biased or not.

I heard very little to object to. I registered a comment by David Dimbleby that I thought might annoy the anti-Thatcher crowd over South Africa, where he (rightly) decisively dismissed the Left's argument that Mrs T. wasn't anti-apartheid. Nothing else struck me as being likely to offer offence to anyone who wasn't going out of their way to be offended (however unconsciously). Fervent partisans and active bias seekers may not be accurate judges of bias after all.

I will need to review the day's coverage carefully, and as objectively as possible, to say whether there is a case to be answered (either way) that the BBC is biased. I won't take anyone else's word for it.

I note with some feeling that one of the poems Baroness Thatcher requested for her funeral was a favourite of mine - Little Gidding by T.S. Eliot.


What we call the beginning is often the end
And to make an end is to make a beginning.
The end is where we start from.

We die with the dying:
See, they depart, and we go with them.
We are born with the dead:
See, they return, and bring us with them.
The moment of the rose and the moment of the yew-tree
Are of equal duration. A people without history
Is not redeemed from time, for history is a pattern
Of timeless moments. So, while the light fails
On a winter's afternoon, in a secluded chapel
History is now and England.

We shall not cease from exploration
And the end of all our exploring
Will be to arrive where we started
And know the place for the first time.
Posted by Craig at 19:51