Still Cutting to the Chase... 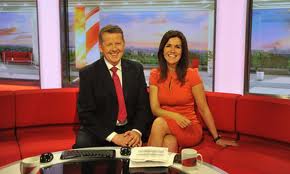 It looks as if where the BBC leads others follow.

Benefit cap reforms rolled out has now entered at No.1 on ITV's online news chart (from which it was absent at 6.00am) and the Guardian and Independent have now placed the story in 4th and 3rd place in their respective pecking orders. (Checking out Google News confirms that they were both published after 7.00am.) Sky News is now also mentioning the story, though only in passing. (If you blinked you would have missed it). The Sky News website is also sticking with regarding it as a low priority story and the Telegraph remains uninterested too.

Such is the agenda-setting power of the BBC, it seems.

Listening to Today from start to finish showed the programme reinforcing this emphasis. As well as leading with the story in its news bulletins, the programme began its second hour with an interview with Alison Garnham, chief executive of the Child Poverty Action Group, a charity campaigning against the benefit cap. The prestigious 8.10 spot was also given over to the issue, with BBC home editor Mark Easton giving listeners his interpretation of the story, after which the relevant minister Mark Hoban was questioned by Sarah Montague. The programme wasn't finished there. It also ended with a discussion on the benefit cuts with a right-leaning journalist, Camilla Cavendish of The Times, and a social entrepreneur with links to the Labour Party, Hilary Cottam. One (Camilla) supported the change, the other (Hilary) didn't. I smell bias here - a suspicion hardly allayed by this enthusiastic tweet from Hilary Cottam, just prior to her interview:


Hilary Cottam ‏@HilaryCottam1h
near unanimity on @BBCr4today that benefit caps will be damaging. About to debate social impact w @CamCavendish #relationalwelfare
Expand


What of BBC Breakfast? Well, after opening with the words "A controversial cap on benefits begins to take effect," a report from BBC reporter Simon Gompertz opened in this way:


[Simon:] A London household hit by the policy that no one should get more benefit than average take-home pay. Single mother Sarah Burns will lose over £90 of her weekly benefit of over £500, which includes housing benefit, child tax credit and child benefit for three kids.

[Sarah:] Obviously we'll have to cut down on shopping bills. I'll gave to cut down, try and use less gas and electricity. I mean, it is really that serious. Obviously, activities, the things that the children do like school trips, scouts, camps, etc, I probably won't be able to do any more.

Simon then outlined the limits, quoted Labour's criticisms, then quoted the government's response, featuring a clip of minister Mark Hoban defending the policy. Sarah was then re-introduced as "one for the first to feel the effects of the benefits cap" and we were left with her image as the report ended.

I outline this report because it is clearly the type of thing Iain Duncan Smith had in mind in his recent interview with the Daily Mail:

‘The BBC is always negative, never explains, never talks about why we are reforming, or the fact that national debt is rising to terrifying levels,’ he complains.


‘All the BBC case studies are hard-luck stories like that of the £53-a-week market trader. They never focus on a family stuck on a housing waiting list or in bed-and-breakfast accommodation.’

The programme also put the issue in its 8.10am spot, giving Conservative minister Mark Hoban a thorough grilling. The questions put by Susanna Reid began with Labour's criticism and kept plugging away with further negative points - or Labour  talking points, as some people might put it - and brought up Sarah's story again (plus emotive e-mails from others in a similar plight). That's as it should be, of course. Mark Hoban was there to defend the government's position and did so. There was no Labour shadow minister or other government critic on Breakfast either, so Susanna was right to press their side of the argument so forcefully.

The switch to the News Channel at 8.30pm brought on the BBC's chief political correspondent, Norman Smith. Norman re-interviewed Mark Hoban. Again, the interview put emotive points to the government minister as part of his mix of questions from the other side of the argument. As the morning has proceeded, Mark Hoban's interview has been replayed several times. Presumably the government critics will appear later  and be challenged from from the other perspective to their own. It would only be right (in both respects).

What's the upshot of all this? That the BBC is setting the agenda here seems clear. That agenda will suit Labour, especially given the way the BBC is framing the story. However, the BBC is allowing the government to put its case across as well; indeed, so far on Breakfast and the News Channel are proving slow to bring in government critics. Today appears more guilty of shaping the debate in a certain direction but, again, it has balanced out its guests in terms of support and opposition.

It's early in the day still. If you are watching the News Channel or listening to Radio 4's current affairs staples you will be able to hear whether the story is kept as the BBC's lead story. As of 11.00am, it still leads the BBC News Channel and the BBC News website. It also still leads the ITV News website. It's falling quite quickly down the Guardian and Independent rankings though, and Sky still remains largely immune to the BBC's news priorities.....Breaking news!....The Telegraph, however, is now also prominently reporting the story, picking up on Mark Hoban's call on Today for couples not to split up over the benefit changes. The BBC's agenda-setting ability continues.

The BBC News Channel is still leading with the story. In the last few hours they've interviewed Jane Symonds of the Money Advice Service,  Alison Garnham of the Child Poverty Action Group (a government critic), Labour MP Anne McGuire (another critic, of course) and Christian Guy  from IDS's Centre for Social Justice think tank (a supporter). The story also led the BBC's News at One (on BBC One) as a result.

It also led ITV's 1.30 News, which featured a similar kind of report (by Libby Wiener) to that featured on Breakfast' - another single  mother (Rowena Cokayne) fearing being forced out of London. Mark Hoban was featured, as was Labour's Anne McGuire. Kate Bell, Child Poverty Action Group, was then interviewed (well) by Alastair Stewart.

Sky News is also now discussing it but, oddly, The World at One on Radio 4 completely dropped the story from its news bulletin. Make on that what you will.

UPDATE 19:00: The BBC's current affairs coverages reaches most British people with its News at Six on BBC One. Can you guess what its lead story was? Yes, the benefit cap. That means that the BBC News Channel and its various (more popular) manifestations on BBC One  have managed to keep it as the lead story all day.

Both channels mentioned the cap's popularity with the public, featured Ed Miliband, Mark Hoban and their respective worried single mums (Sarah for the BBC, Rowena for ITV) in their reports. The BBC added Ruth Davison of the National Housing Federation  as an additional government critic.

If you're interested, this afternoon's interviewees on the News Channel (discussing this subject) were:

This redressed the balance in favour of the critics of the benefit changes. I make it 4 guests in favour, and 6 guests against between 6.00am and 6.00pm.

Also, Radio 4's PM followed The World at One in choosing not to discuss the story. (I won't be discussing it any more either!)
Posted by Craig at 11:03