Cutting to the Chase 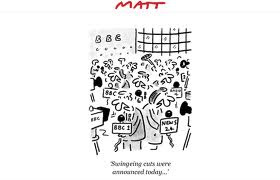 Comparing the news priorities of various media outlets this morning - a snapshot taken at 6.00am - shows that a number of stories are considered important by all media outlets (N Korea, Venezuela, etc); however, it's the differences that are intriguing.

As ever, you can see the Guardian and Telegraph offering their readers a range of additional stories which reflect the political interests of their respective readerships.

The most striking difference, however, is between the BBC and everyone else. Only the BBC is leading with the roll-out of benefit cuts, with trials beginning today in four London boroughs.

This unique decision to lead with the cuts story is reflected across its output - on the news website, on Radio 4's Today and on BBC Breakfast.

Why is it doing so, when the changes are only impacting on four London boroughs? The other media outlets, as you con see below, don't rank it as a major story at all.

I suspect that those Tory allegations that the BBC is really the "BBCC" - "British Broadcasting Cuts Corporation" - might be making a reappearance today!

A government-imposed limit on benefit payments begins in four London boroughs ahead of its introduction across England, Scotland and Wales.

The London Symphony Orchestra has announced the death of its longest-serving principal conductor, Sir Colin Davis, at the age of 85.

Adam Scott collects the first major of his career after beating Angel Cabrera at the second play-off hole at the Masters. BBC SPORT

Armed Forces personnel have been involved in a full military rehearsal ahead of Baroness Thatcher's ceremonial funeral.

All eyes are on North Korea to see if it marks the birthday of its late founder with an expected missile launch.

Bieber Hopes Anne Frank 'Would Have Been Fan'

The superstar attracts fresh controversy after saying he hoped the Holocaust victim would have been a 'belieber'.