Two Angles on One Story

I spotted this story as it was 'breaking'. So far a Google News search brings up only a couple of results. That will change before long, of course. News 'breaks' fast these days.

Though the gist of the story is similar in each account, I was struck by marked differences between the two takes - one from Reuters, one from the BBC.

Please have a read of them for yourselves and see if you are struck in the same way: 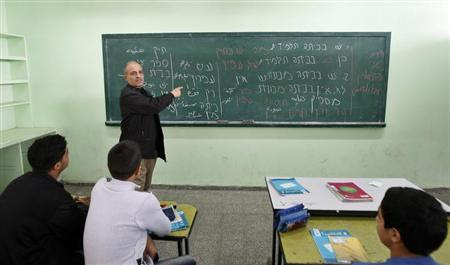 (Reuters) - New rules from the Education Ministry of the Islamist Hamas movement ruling the Gaza Strip will bar men from teaching at girls' schools and mandate separate classes for boys and girls from the age of nine.
The law, published on Monday, would go into effect next school year and applies throughout the coastal enclave, including in private, Christian-led and United Nations schools.

Critics of the new measures say the Islamist movement is trying to force its ideology on society, but proponents say they merely want to codify conservative Palestinian values into law.
We are a Muslim people. We do not need to make people Muslims, and we are doing what serves our people and their culture," Waleed Mezher, the Education Ministry's legal adviser, told Reuters.
Hamas has administered Gaza since fighting a brief civil war with its Palestinian rivals in the secular Fatah party in 2007, a year after it won a surprise majority in Palestinian parliamentary polls.
The political split paralysed the legislature and mostly prevented the passing of new laws in Gaza and the West Bank

.
But Hamas parliamentarians in Gaza acted alone to approve the new education law, and the movement's critics have for years accused it of trying to build a separate state in Gaza.
Zeinab Al-Ghoneimi, a Gaza activist for women's rights, said the new law was part of a Hamas project to impose its values on Gaza residents.
"To say that the old law did not respect the community's traditions and that they (Hamas) wanted to reform people now is an insult to the community," Ghoneimi told Palestinian radio.
"Instead of hiding behind traditions, why don't they say clearly they are Islamists and they want to Islamise the community," she said.
Private and Christian schools, where classes are mixed until high school, would be the most affected by the decision. Gaza's government-run schools were already mostly gender-segregated.
The Gaza Education Ministry said the private schools had been invited to discuss the legislation before it was enacted but failed to do so.
Hamas leaders have repeatedly denied accusations by human rights groups they are trying to impose Islamic laws on Gaza.
Rights activists have criticised moves by Hamas's government in recent years to impose Islamic dress on female lawyers and school girls, ban men from working as hairdressers for women and interrogate couples walking in Gaza's streets.
(Reporting by Nidal Almughrabi) 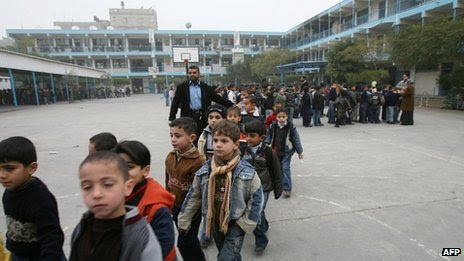 In practice, most schools in the Gaza Strip are already segregated by the time children reach nine years old
Continue reading the main story

Hamas, the Islamist group that governs the Gaza Strip, is to introduce a law banning mixed-sex schools for all children over the age of nine.
In practice, virtually all schools in the Palestinian territory are already segregated at that age.
The law appears largely to be aimed at asserting Hamas's Islamist credentials, says the BBC's Jon Donnison in Ramallah.
The vast majority of schools in Gaza are run by either Hamas or the UN.
All of those are already segregated after the age of nine, says our correspondent
There are a handful of private schools where boys and girls are taught together: In theory, the new law will mean that is no longer possible.
But the BBC's Jon Donnison, in Gaza, says it remains to be seen if Hamas will enforce the legislation.
In the past, Hamas has approved laws aimed at appealing to conservative elements in Gaza: Banning men from cutting women's hair or forbidding women from smoking water pipes are two examples. But in those cases the laws were never fully enforced.
The majority of Palestinians in Gaza and the West Bank accept segregated education as part of their culture, our correspondent says.
As such, the new law in Gaza will likely receive little opposition while at the same time allowing Hamas to dampen criticism from more conservative Islamists who believe the government is too moderate, our correspondent adds.
Israel, as well as the United States and the European Union, regard Hamas as a terrorist organisation.

I was struck by the 'move along, nothing to see here' tone of the BBC article. The article seems to be saying, it's not a big story. It may not even happen, it suggests. Plus it's already in place, almost universally - except for "a handful" of private schools. The message the BBC article puts across seems plain - from the caption beneath the picture stating that "most schools in the Gaza Strip are already segregated" to its reiteration in the text at "In practice, virtually all schools in the Palestinian territory are already segregated at that age" and the simple statement that "the majority of Palestinians in Gaza and the West Bank accept segregated education as part of their culture, our correspondent says", culminating in the assertion that it will "receive little opposition".
Really? The implied concession in the phrase "receive little opposition" that their could be some opposition is not met, however, by any reflection that there already is opposition. That there is, indeed, opposition is made clear by the Reuters article, which gives a good deal of space to rights activists - specifically women's rights activists - and to their objections to this move by Hamas. You might have thought that the BBC would have included a quote or two from such activists and I'm curious to know why they chose not to.
The Reuters account, in fact, contains a range of points critical of Hamas, whilst also quoting Hamas. The BBC account does neither - until, to its credit, it mentions (where Reuters fails to mention) that Hamas is considered a terrorist organisation by Israel, the US and the EU.
Another intriguing difference is that the Reuters account makes clear (twice) that Christian-led schools are also going to be effected by the Hamas law. This is significant, as Gaza's small Christian community has been moving out of the Gaza Strip ever since Hamas took over in 2007. Their numbers have fallen by half. This looks like another act of Islamization which could be aimed at the Christian community, given that (as the Reuters account makes clear), only the private schools and the Christian-led schools seem still to have mixed-sex classes. The BBC account (featuring blog favourite Jon Donnison) fails to mention the Christian-led schools at all.
The BBC's curious way with inverted commas is evident again in their decision to place them around the word "ban" in the headline. It casts doubt on its being a ban. The Reuters account casts no such doubts, leading its readers to assume that it will happen and it will be imposed on all schools in Gaza - including Christian-led ones.
Another difference is that the Reuters account says that male teachers will be banned from teaching in girls schools. The BBC account doesn't inform its readers about that either.
These kind of comparative studies often produce sharp differences between what one media organisation informs its readers and what another media organisation informs its readers. All of which shows that it pays to make use of the internet as much as possible to garner a range of perspectives on a news story. The less there's a monopoly on the provision of news the better. For all its fault, God bless the internet!