Cut to the (not so) quick 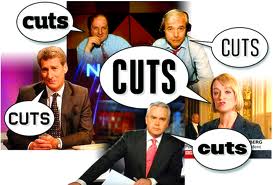 The BBC News website has been leading all day with:

Their main report goes on to say:

The Easter criticism has come from the Baptist Union of Great Britain, the Methodist and United Reformed Churches, and the Church of Scotland.

"Easter criticism" by the churches? Well, not according to the Spectator:


COFFEE HOUSE UPDATE It appears that the timing of this – Easter – may have been chosen by the BBC rather than the four church groups. The report that the BBC report refers to was published four weeks ago (pdf) but appears to have been reheated for a slow news day. The Guardian’s version of the story is more honest about the timing, admitting this halfway down.

The Guardian's "honesty" amounts to confirming that the churches' report "was published earlier this year". (The timestamp - and a quick check on Google News - exonerates the Guardian itself from the Spectator's accusation, as its version of the story followed the BBC's by some hours).

The BBC has often been accused by Conservative-inclined politicians, journalists, bloggers and their readers of going well beyond merely reporting opposition to "the cuts". Some accuse the corporation of actively campaigning against the cuts. So has the corporation really been holding back on reporting this criticism until a suitable slow news day came up - or, even, a more high-profile news day (Easter Sunday, for example)?

A further surf of the net searching under the report's title ("The lies we tell ourselves: ending comfortable myths about poverty") reveals that the report has been picking up mentions since it was published on 1 March - from Tax Research UK to Mumsnet.

Why has it taken so long for the BBC to report it and why - on Easter Sunday - has it now made it the corporation's main news story of the day? Moreover, why call it "Easter criticism" when it was published a month ago?

Hmm. The "they've only just noticed it" explanation is one possibility, I suppose. Closely related to that - and what must be assumed to be the 'official answer' - is the "the churches only brought it to our attention today" explanation (i.e. it was wholly the churches' choice of timing). The "slow news day" theory is certainly another possibility. Entering far more dangerous territory for the BBC, however, the "save it for Easter Sunday when it will have a bigger impact" or, even worse perhaps, the "save it for nearer the time when the benefit cuts begin (tomorrow!)" explanation is another, albeit highly inflammatory explanation. If that's really the case heads would need to roll at the BBC.

Something else is puzzling me.

The BBC's report is also notable for failing to mention something else that the Guardian mentions:


[Paul] Morrison [public issues policy adviser at the Methodist church] spoke out as Grant Shapps, the Conservative party chairman, used an interview with the Sunday Telegraph to highlight figures apparently showing 878,300 people who were on incapacity benefit dropped their claims rather than complete a medical assessment.
That was a third of the total, he said, and included people on benefits because of blisters, acne, and strains and sprains. Of the 1.44m who have been reassessed, 55% were found fit to work immediately and another 23.9% able to do some level of work, leaving just 232,000 declared not fit to work.

This striking figure of 878,300 people dropping their claims for incapacity benefit rather than complete a medical assessment is obviously newsworthy. Like the Guardian and the [paywall-bound] Telegraph, Sky News certainly thinks so. So does the Daily Mail and the Huffington Post.

Look for that figure on the BBC News website though and you won't (as yet) find it. Why? Because they haven't reported it online.

Why ever not? It's an important riposte from the government which directly challenges and contradicts the contentions of the four churches. It quite clearly should have been reported by the licence-fee funded BBC, shouldn't it? (If that doesn't appear obvious to you, I'd be interested to hear why).

David Cameron famously nicknamed the BBC "the BBBC - British Broadcasting Cuts Corporation". Sometimes it's not hard to understand why.
Posted by Craig at 20:56