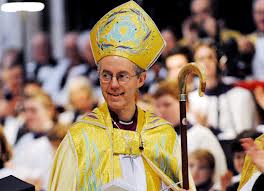 As we approach the moment when Justin Welby becomes the new Archbishop of Canterbury, Radio 4's liberal religious current affairs programme Sunday announced that it would be presenting three audio essays over the coming weeks anticipating the moment.

Did you see what I did there? I wrote "Radio 4's liberal religious current affairs programme", even though I'm well aware that BBC Radio 4 would deny that the programme has any standpoint - liberal or conservative - and that they would also say that the programme conforms to BBC standards of impartiality.

I don't really accept that though (well, not in the way they mean).

So, time for another test of BBC impartiality. This is to see whether the three people chosen to present the Sunday talks reflect a fair range of Anglican opinion.

This week's essayist was Sunday regular Canon Rosie Harper, a left-wing feminist from the liberal wing of the Church who used her talk to call for the Church of England to fully embrace her progressive values on social issues. Assuming the Sunday team are committed to the spirit of impartiality, next Sunday's speaker will be a social (and perhaps political) conservative from the other wing of the Church. The third and final speaker would then, presumably, be someone from the centre ground of Anglicanism. That would be the fair way to do it.

If, however, they neglect to include a conservative Anglican speaker or if they feature a second firmly liberal Anglican who shares Canon Rosie's general outlook, they will have failed to meet the spirit of impartiality.

As it's Sunday and time to be charitable, I'll be positive and hope that Sunday doesn't betray a liberal bias and instead gives us three contrasting Anglican points of view over the next three weeks.