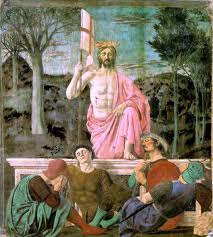 Radio 4's Sunday celebrated the Christian world's holiest day by talking to a Christian pastor in the Bekaa Valley about the Syrian refugee crisis, following this with a report on Rowan Williams's involvement with a Cambridge Food Bank in these times of austerity and benefit cuts, an interview with a Cypriot journalist about the Orthodox Church's role in the present crisis (he wasn't enthusiastic), a piece on a female saint (Egeria) and an interview with a Labour peer, Lord Touhig, who has added his name to a letter to Pope Francis calling for reform to the Catholic Church's stance on clerical celibacy. There was also a report on the power of prayer before the programme ended with a ding-dong scrap between two Anglican bishops (yes, really!) over whether George Carey was right to say that Christians feel persecuted in this country.

The report on the power of prayer intrigued me because I'd only been reading about the poll behind it the day before:

The Church of England have released a poll they claim shows the vast majority of people believe in the power of prayer, when it does no such thing. There is nothing at all wrong with ICM’s actual polling, which asks people “Irrespective of whether you currently pray or not, if you were to pray for something at the moment, What would it be for?” (emphasis is mine). A perfectly reasonable question, asking people what they would pray for, if they were the sort of person who did pray.


However, the Church of England have gone rather rogue in interpreting the results, deciding that everyone who gave an answer to ICM’s hypothetical question of what people would pray for if they prayed must therefore believe in prayer – putting out a press release claiming that “Four out of five British adults believe in the power of prayer”. The Telegraph has gone on a similar flight of fancy, declaring “Six out of seven people still believe that prayers can be answered despite a dramatic drop in formal religious observance, a study has found.”
In a population where only around half of people believe in a god at all, any claim that 80% of people believe prayer works should ring alarm bells anyway. For the record the last poll I can find that actually asked whether people believed that prayer worked was by YouGov for the Sun in 2012. That found 31% of people believed that prayer worked in some way (that is they thought prayers were heard by God, or were physically answered in some other way), compared to 45% who did not and 25% who weren’t sure. (UK Polling Report).

The Telegraph isn't the only media outlet to have reported this survey - or, more precisely, the C of E's  interpretation of it - uncritically.

Here's Trevor Barnes's introduction to the report on this morning's Sunday:

If a new Church of England poll is anything to go by most of us routinely resort to prayer in the face of personal difficulty. What's more a sizeable majority of those surveyed said it believes those prayers are answered. Of those taking part a third said they prayed for world peace, for example - well, we can skip over that one! - while others included health, relationships, prosperity and work among their personal prayer requests.

Well, no actually. To see what's wrong here, simply compare the question in the ICM poll, which asks what people would pray for (hypothetically-speaking) if they were to pray:

"Q.1 Irrespective of whether you currently pray or not, if you were to pray for something at the moment, What would it be for?"

with Trevor's re-write of it, which mistakenly assumes that those 31% of peace-lovers have already prayed for world peace:

"Of those taking part a third said they prayed for world peace, for example."

Still, he gives me the chance to post a favourite poem by one of my favourite poets, George Herbert, on the same subject - just for the sake of it!:


PRAYER the Churches banquet, Angels age,
Gods breath in man returning to his birth,
The soul in paraphrase, heart in pilgrimage,
The Christian plummet sounding heav’n and earth ;

Engine against th’ Almightie, sinner's towre,
Reversed thunder, Christ-side-piercing spear,
The six daies world-transposing in an houre,
A kinde of tune, which all things heare and fear ;

Softnesse, and peace, and joy, and love, and blisse,
Exalted Manna, gladnesse of the best,
Heaven in ordinarie, man well drest,
The milkie way, the bird of Paradise,

Church-bels beyond the stars heard, the souls bloud,
The land of spices, something understood.
Posted by Craig at 14:04