A Tale of New Life...and Many Deaths. 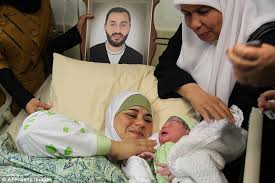 There's a rather hard-to-believe story featuring prominently on the BBC News website.


The article tells of how a number of Palestinian women are getting pregnant using their husband's sperm, smuggled out of Israeli prisons, thanks to fertility doctors in the West Bank. The Israel Prison Service are sceptical, however, given the tight security measures in place during meetings between security prisoners and their relatives.

Jon Donnison's article paints a tender scene of the birth of baby Muhannad to his mother Dallal. The father, Ammar Ziben, is absent though. He's in an Israel prison "for his involvement in bomb attacks in Jerusalem in 1997."

That last detail is quickly passed over. It comes and it goes without further comment. In other reports which I've read, such as the following from NBC News, some important additional information is given about those bomb attacks:

Many of the men are serving long sentences for terrorist offences.

Ammar Al-Zibben has been in prison for 16 years. He is serving 27 life sentences with an additional 25 years for plotting bomb attacks in Jerusalem that killed 21 people.

Why did Jon Donnison choose to omit that fact? Your guess is as good as mine.

In a story about bringing new life into the world, it's hardly an incidental point that the man at the centre of the story was responsible for taking 21 innocent lives out of the world.

NBC's account includes something else not featured in Jon Donnison's report:

Her husband got to see his son for the first time six months ago.

“The meeting was happy, sad, exciting. It was mixed with a lot of feelings and tears, I can’t describe to you how we both felt,’’ she said.

Except for the brief quotes from the Israel Prison Service, Jon Donnison's article treats the story with very little scepticism. Its main source is one of the fertility doctors who claims to have been helping the women, Dr Salem Abu Khaizaran. Despite saying, "I don't want to get into the politics", Dr Abu Khaizaran does then get into the politics:

Dr Abu Khaizaran believes Palestinians should be given the same rights. He says until that happens, Palestinian prisoners will likely continue to try and smuggle sperm out of jail for their wives.

After the emotive opening....


Just a few seconds old, but already strong of voice, Muhannad Ziben did not sound best pleased as a midwife, gripping him by the ankle, hoisted him above his mother and snipped the umbilical chord.


He was born in Nablus's al-Arabia hospital in August last year.
Within a few hours he looked more comfortable, snoozing in the arms of his mother Dallal. The father though was absent.

...Jon Donnison gives us the doctor's version of events at some length. The IPS's response is much briefer and is immediately undermined by Jon Donnison's own commentary...:

Unlike some Israeli prisoners, Palestinians who are jailed for what Israel calls security offences are not allowed conjugal visits where they can be intimate with their partners.

...and then by what Jon Donnison says is the IPS's inability to answer a question:

The IPS could not say whether any Palestinians jailed for criminal offences had ever been granted such visits.

The Palestinian Authority Minister of Prisons Issa Qaraqa is then quoted, reinforcing the points which the BBC reporter has just been making and Dr Abu Khaizaran is then brought back to further reinforce the point, both openly criticising Israel while so doing.

The article ends on a hopeful (and completely unsceptical) note:

A number of the doctor's clients are expected to give birth this spring.