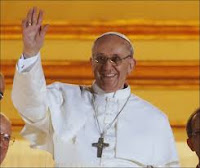 Keeping an eye on religious matters, I've been trying to catch up with a few things and tying up a few loose ends...before moving onto other matters.

Firstly, I wanted to hear how BBC Radio 4 dealt with the election of Pope Francis, especially as the edition of The World Tonight which followed his election was hosted from Rome by blog favourite, Sunday's Edward Stourton.

Regular readers of this blog will probably know what the issue is here. Would liberal Catholic Tablet trustee Ed Stourton interview only fellow liberal Tablet Catholics and ignore, as his Sunday programme ignored for at least two years (until a post on this blog provoked a stream of complaints), its more conservative rival The Catholic Herald?

No one listening to Ed's broadcast could say that the BBC is "anti-Catholic". Ed's report radiated the joy of the occasion. I'd say he seemed delighted.

He interviewed Cardinal Cormac Murphy-O'Connor. Then he interviewed Edward Pentin, Vatican correspondent of The Catholic Herald. This pleased me. It was only a while back that I asked "How about Edward Pentin instead of Robert Mickens?"  and, lo and behold, here was Edward Pentin - someone I've never heard Ed Stourton interview before. Edward was pleasant towards Edward. The question is answered.

This is all good.

A report by the BBC's Tom Esslemont raised the issue of Pope Francis and the Argentinian junta, but its Argentinian vox pop rejoiced in the elevation of Cardinal Bergoglio.

Sister Jane Livesey and Chris Bain of Cafod followed. They sounded as hopeful as liberal Ed about the new pope.

Ritula Shah took over as presenter at that point. She interviewed Catholic philosopher and Vatican advisor John Haldane and, yes, inevitably it had to happen, Abigail Frymann, online editor of The Tablet. I won't complain as it shows the BBC abiding by its commitment to impartiality. Someone from The Tablet appearing on the same programme as someone from The Catholic Herald is an excellent sign. A diversity of opinion is all I want. If I'm not mistaken, Abigail (critical, as ever, of Pope Benedict) seemed even happier than Prof Haldane about the election of Cardinal Bergoglio.

The BBC's reporter in Argentina then presented the BBC's view from Argentina. She struck a balanced note. She didn't sound enthusiastic, but she wasn't negative-sounding either. Quite right.

Ritula then interviewed Archbishop Vincent Nichols, the leader of Catholics in England.

To complete this 'good news' part of the post, Ed then gathered together the BBC's veteran Rome correspondent and occasional Tablet contributor David Willey, Austen Ivereigh of Catholic Voices and seminarian Colin Mason. Revealingly, Ed (of the BBC) continued to sound very happy that the papal conclave hadn't produced someone in the conservative image of Benedict XVI. This is the main point of the evening where Ed's liberal bias really stood out. Being a "not-a-Catholic" it was very apparent that Ed was cheered by the "imaginative" nature of the move. However, his question to Austen Ivereigh showed his concern that the new pope wasn't on-message over such things as gay marriage (which Ed stated was a problem for "European Catholics").

Last Sunday's Sunday was equally upbeat in tone. Edward Stourton gave every impression of being a contented man (for the time being). There was a balanced report from Argentina by Bruce Douglas; John Laurenson visits Assisi, home town of St Francis; Edward discussed the rules of Ignatius Loyola with Fr. Michael Gallagher; the potential reshaping of the Curia was discussed with the ubiquitous Fr. Tom Reese and Dr Donna Orsuto of the Gregorian University; and the closing discussion was between Gerard O'Connell of Vatican insider and Tom Reese.

From hearing the unmistakable tone of Edward throughout both of these programmes and tying it in with the palpable sense of relief and satisfaction expressed by the liberal commentary team assembled by the BBC for their live coverage of the papal election (Robert Mickens, Tom Reese and Mgr. Roderick Strange), I can only say that - for the time being - the Tablet/"BBC Catholic" wing of the Church is on a bit of a high. Had the pope been someone much closer to the spirit of Benedict XVI I suspect the discussions on this edition of Sunday would have had a very different colour and tone. That's just a hunch though. It can't be proved. 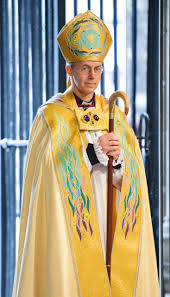 The same edition of Sunday also marked the (then) coming enthronement of the new Archbishop of Canterbury. Kevin Bouquet presented a report on Justin Welby's Pilgrimage of Prayer. Trevor Barnes then interviewed the new archbishop.

The final piece of the jigsaw was put in place as regards the short series of Letters to Justin by Anglican figures. My test of the programme's commitment to impartiality was to see whether the three Anglicans chosen represented a fair spread of Church of England opinion. After the first Letter was from Canon Rosie Harper from the Church's liberal wing, the test was set:

Assuming the Sunday team are committed to the spirit of impartiality, next Sunday's speaker will be a social (and perhaps political) conservative from the other wing of the Church. The third and final speaker would then, presumably, be someone from the centre ground of Anglicanism. That would be the fair way to do it.

Well, the second Letter was from Bishop Michael Nazir Ali from the Church's conservative wing and the final Letter was from Rt Revd Dr Solomon Tilewa Johnson, Archbishop of West Africa, from the centre ground of Anglicanism. The BBC, therefore, passed that test of impartiality with flying colours. There was no Giles Fraser after all (as I was sort-of predicting there would be)! So we can all breathe a sigh of relief!

As for Justin Welby's enthronement the BBC provided full, uninterrupted coverage live on the News Channel. In contrast to the election of Pope Francis, the BBC far exceeded Sky News here. Sky's coverage was a disaster, with their live broadcast breaking down embarrassingly on several occasions. The BBC was definitely the one to watch there.

Huw Edwards gathered together a three-person commentary team consisting of, ah yes!, Giles Fraser, Christina Rees and the retired Bishop of Manchester Nigel McCulloch. Giles and Christina are both from the Anglican Church's liberal wing, while the former Bishop of Manchester is from its centre ground. There was no one from its conservative wing. That mirrored the liberal Catholic panel gathered for the live coverage of the papal election.  There are clearly "BBC Anglicans" just as much as there are "BBC Catholics".

Moving onto matters secular, today's Dateline London bucked the trend I outlined in last week's post about the programme. (Do the makers of Dateline London read this blog?) Instead of the usual string of editions without a single right-winger, this week's panel was had not just one but two right-of-centre guests - namely the ever-charming Thomas Kielinger of Die Welt and Alex Deane of Conservative.Home. The other two guests, Mina Al Oraibi of Asharq Alawsat and Stephanie Baker of Bloomberg, are no left-wing ideologues either.

A balance of contrasting perspectives every week would be preferable though.

A balance of contrasting perspectives is something all these BBC programmes should be offering as a matter of course. Of course.