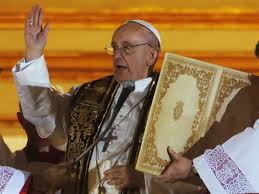 I decided to watch Sky News's coverage of the election of the new pope, Francis I (the former Cardinal Bergoglio of Buenos Aires).

Hosted by Colin Brazier, the coverage featured commentary from Alastair Bruce - the channel's go-to man for big national and international events. Mgr. Mark Harold of the English College in Rome and Austen Ivereigh of Catholic Voices were their guests throughout, providing perspectives on what was unfolding before our eyes. Background and descriptive detail were given with no apparent axes to grind. The election was viewed as an historic event.

I also recorded the BBC News Channel, watching back through the same period later in the evening, thus witnessing history being made twice!

Jon Sopel presented for the BBC.  At his side was the BBC's religious affairs correspondent Robert Piggot. Their guests throughout were Robert Mickens of The Tablet and Fr Tom Reese, former editor of The Catholic.

The emphasis was starkly different from that of Sky News. The BBC presented it as much more of a political event.

Plus there were plenty of very apparent axes being ground by Mr. Mickens and Fr. Reese, who of whom share a strongly liberal outlook, which they projected forcefully throughout the BBC's coverage. Mr. Mickens is famous for weeping with distress at the announcement of Cardinal Ratzinger's election to the papacy as Benedict XVI. (He didn't sound at all distressed by Cardinal Bergoglio's election). Fr. Reese is well-known for being ejected from his editorship of The Catholic by the self-same Cardinal Ratzinger. Neither are fans of the Pope Emeritus then.

It does seem to me to be highly revealing that the BBC chose two such prominent liberal Catholics to be their commentators for this historic event. Their shared perspective dominated the broadcast, especially as Fr. Reese was later replaced by another well-known liberal Catholic, Mgr. Roderick Strange. Like the others, he sounded relieved/pleased at the choice of Cardinal Bergoglio.

Later reaction was gather from Chris Bain of the aid agency Cafod, a less-than-impressed sounding Argentinian BBC producer called Julian (who described Cardinal Bergoglio as "controversial" for his views on gay marriage and seemed to rather take Jon Sopel aback with his negative tone), two Ecuadorian girls in the crowd,  Cardinal Cormac Murphy-O'Connor, some more Latin Americans from the crowd,  various other BBC reporters in Latin America, plus David Willey.

I'm glad I watched Sky News first. I prefer to watch history being made without being overwhelmed by a particular, partial, politically-minded, one-sided point of view. I'm afraid that's what we got from the BBC.
Posted by Craig at 22:40