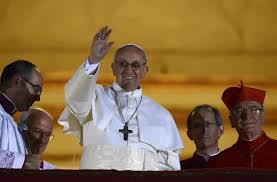 An Italian translator during the BBC's papal election coverage failed to render the Lord's Prayer into its familiar English phrases, providing a literal interpretation instead.

Large numbers of commenters on the Daily Mail website have rightly given the Mail a thoroughgoing fisking for their truly pitiful attack on the BBC over this. The second most-highly-rated comment sums up my feelings:

Most desperate attack on the BBC of all time?

The Mail's pitiful attack though is as nothing, however, compared to this comment made at Biased BBC. I want to share it with you as it shows how far some of the BBC's sternest critics can go in their criticism of the corporation:

This story shows the complete disregard and lack of respect the BBC holds for the millions of Catholics world wide.
It’s not everyday a new Pope is elected, and considering the event, one would think that the BBC would make sure whoever is going to translate the words of the incoming Pope, they would be familiar with the English terminology and expressions likely to be used.


I don’t know yet who’s decision it was to use the Italian translator they did, but clearly he had no religious background, judging how he tried to translate the Lord’s Prayer. Was it the BBC’s Muslim head of religion idea of a dig at Christianity, or the decision of just some secular idiot that felt any religious background of this individual was not relevant or important?


I cannot imagine them doing the same if it was to translate a sermon or speech of an Islamic Imam, so why do they think this would be acceptable? What if the translator quoted the Imam as saying Jews and Christians were pigs and dogs???


Oh yeah….
Outrageous!
Video of part of the translation is available on the webpage below.
‘He is clearly not a Catholic! Viewers slam BBC’s Pope election coverage after on-air translator fails to decipher the Lord’s Prayer and the Hail Mary correctly

My favourite bit is "Was it the BBC’s Muslim head of religion idea of a dig at Christianity...." (Simple answer: No!)

For the BBC, with enemies like that, who needs friends?
Posted by Craig at 14:42