A Baby.
A dead baby
A baby killed  by a rocket.
A rocket from Israel or a rocket from Hamas.
What’s the difference?
This is not a poem by the way.

An own goal counts the same as a normal one in the end. The final score doesn’t differentiate. But in the world of anti-Israel advocacy, the origin of one deadly strike means it is lauded as a publicity triumph, while a deadly strike from differing origin turns the same calamity into a move-along-nothing-to see-here embarrassment.

In war any innocent victim, collateral damage, innocent life lost, baby, child, civilian, bystander, is a tragedy; but in the world of ‘politics’ some tragedies are more tragic than others. 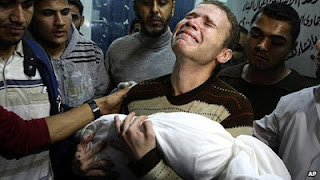 Take ‘he only knew how to smile’.
This was publicised, inflated and exploited for one reason and one reason only. Because it was assumed that it would be universally and unquestioningly accepted that the perpetrators, the murderers, the child-killers, were the dastardly Israelis.

Despite all the doubts raised by ‘bloggers‘ at the time based on available evidence suggesting that this tragic incident was very likely caused by one of Hamas’s frequent own goals,  their collective arguments were dismissed with a breezy ‘they would say that, wouldn’t they’.
Every drop of pathos was squeezed out of the story. The bereaved father was featured in various grief-stricken poses, resplendent in one or another of his trademark stripy jumpers, throughout the MSM,  including the ritual corpse-parade that once seemed so incongruous, and to which we are now becoming accustomed.

As well as Jon Donnison, whose article rebranded the name ‘Jihad’ to a more benign ‘Jehad’, Owen Jones was another passionate disseminator of moral outrage, using the incident as inspiration for a histrionic outburst on Question Time during which he elevated the tragic father to ‘BBC journalist‘,  and by sheer force of personality appeared to vanquish the other panelists’ feebly spluttered, ill-informed attempts to appear even-handed.
It doesn’t matter. A dead baby is a dead baby. He’s equally dead whichever side fired the missile. The crime is that the whole Israel/Palestine conflict is misunderstood by the media, then misreported by the media, deliberately misrepresented by the media, and in effect prolonged, exacerbated, and exploited by the media.
This one episode encapsulates everything that is wrong.  We are given our information by partial, biased, ignorant people who unquestioningly accept and regurgitate the speculation, rumor and wishful thinking that emanates from unreliable Palestinian sources, while they remain permanently suspicious, distrustful and selective in reporting the words, deeds and intentions of the characteristically truthful and  judicious Israelis.

Let’s see if the media is as interested in reporting the news that the UN seems to agree with the ‘bloggers’, the ‘they would say that’ers and the defenders of Israel, and see if there is as much fanfare over this journalistic failure as there was when everyone thought Israel had killed another baby.
But just as they excuse all these the failures, such as the predicted Israeli ‘move to the right’ which never happened, but which they decided wasn’t wrong after all (because of a perceived difference in the ‘centre of gravity’) no doubt they’ll  say that all Hamas rockets can ultimately be attributed to “Israel’s failure to make peace”, so at the end of the day the dead baby is still Israel’s fault. 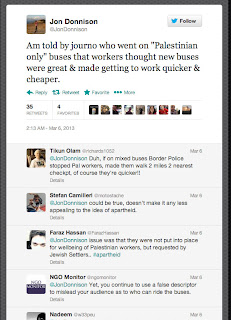 Even Donnison knows that the Palestinians are pleased with the bus, but his Twitter buddies have almost turned me into Richard Ingrams. It’s just that as soon as I see a Muslim-sounding name I seem to guess there will be some sort of anti-Israel sting in there.
The workers seem to like the buses, but Faraz Hassan and Co just can’t seem to handle it.