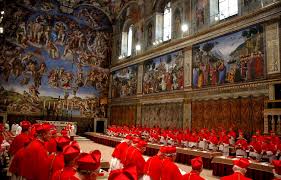 Sunday is continuing to improve in its handling of Catholic matters. Today's edition was another Catholic-centred programme, in anticipation of the coming papal conclave.

As you will know if you've been reading this blog from the start, all the Catholic specials from 2011 and 2012 largely consisted of gatherings of Ed Stourton and his usual team from the liberal Catholic magazine The Tablet. Too many like-minded discussions resulted. This time, however, Samira Ahmed was the presenter and we were given a well-balanced panel consisting liberal Catholic Fr Thomas Reese, conservative Catholic Jack Valero and, from the mainstream of the Church, Sr Jane Livesey. A range of opinions resulted. Good!

The programme also featured David Willey reporting on the preparations in Rome and an extract from a new work of fiction by Sarah Dunant recreating the election of the Borgia pope.

There was also, inevitably (and wholly reasonably) a report from Kevin Bouquet on the moral standing of the Catholic Church in Scotland in the wake of the scandals of the last couple of weeks. We heard from Fr Alexander Lucie-Smith of the Catholic Herald, Barbara Dorris of the abuse survivors' organisation SNAP, Catholic parishioners outside an Edinburgh cathedral and leading Catholic theologian Prof. John Haldane. Again, a decent cross-section of Catholic opinion.

As you can see from that list, the long drought (i.e. complete absence) of any contributors from the Catholic Herald on the programme in 2011 and 2012 (in contrast to the large number of guests from its liberal rival The Tablet) is well and truly over. It was the overwhelming and unanswerable evidence of an imbalance (and the appearance of a conflict of interest) provided by this blog - as taken up by Damian Thompson and James MacMillan at the Telegraph and by other leading British Catholic bloggers - which sent the complaints pouring into Sunday. The BBC has clearly taken this on board and acted to remedy the situation - at least as far as Sunday is concerned. (You see, it can work!!)

Moving onto the Church of England, last week's edition began a series of three Letters to Justin in anticipation of the moment when Justin Welby becomes the new Archbishop of Canterbury. I wrote about the series last week. It seemed a good test of the programme's commitment to impartiality to see whether it chose a representative range of Anglican opinion:

This week's essayist was Sunday regular Canon Rosie Harper, a left-wing feminist from the liberal wing of the Church who used her talk to call for the Church of England to fully embrace her progressive values on social issues. Assuming the Sunday team are committed to the spirit of impartiality, next Sunday's speaker will be a social (and perhaps political) conservative from the other wing of the Church. The third and final speaker would then, presumably, be someone from the centre ground of Anglicanism. That would be the fair way to do it.

If, however, they neglect to include a conservative Anglican speaker or if they feature a second firmly liberal Anglican who shares Canon Rosie's general outlook, they will have failed to meet the spirit of impartiality.

Well, this week's talk was from Bishop Michael Nazir Ali - a leading Anglican from the Church's conservative wing. So, so far so good!

All the programme now needs to do is to avoid giving next week's final Letter to Justin to someone like Giles Fraser (another voice from the Church's liberal wing) and that sigh of relief can well and truly be breathed!