Honest Reporting warns us to watch out for certain ‘spins’ during Obama’s M.E. visit. Number one is: “Settlements are the biggest obstacle to peace’
We don’t have to look far. Here’s the BBC’s Yolande Knell. 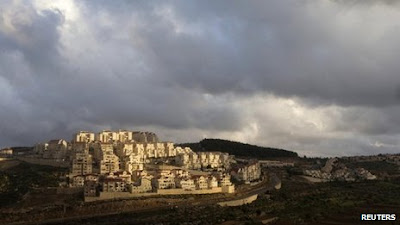 is the caption to the photo of storm clouds over (presumably) an ‘illegal settlement’.

It’s spin, and it’s misleading.  BBC readers might not realise that the peace-talks were just as derailed during Israel’s ten-month freeze on settlement construction as they were before and after it.
“The AP got the facts straight, however, noting that the Palestinians did not take advantage of the freeze during the ten-months” but nevertheless the Palestinians have managed to persuade Yolande Knell, the BBC and the rest of the world to regard settlements as the sole obstacle to peace, (or peace talks)  so we are forced to accept that this erroneous theory will prevail, while the real obstacles, both insurmountable and pernicious, are the rejectionist,  genocidal aspirations of the Palestinians.

“a bellicose, right-wing Israeli nationalist, a rejectionist… and a reactionary.” whose government is “the most aggressively right-wing, diplomatically intransigent, and overtly racist government in Israel’s history.” A government of “militant nationalists.” It “is in danger of drifting towards fascism.” He is “a jimcrack politician.” He is “the war-monger in chief.”

Again, from JPost:
"In a 2010 edition of The Antonian, the newsletter of St. Antony’s College (Oxford), he wrote, in another brutal assault on Israel, that: “Netanyahu is like a man who, while negotiating the division of a pizza, continues to eat it.”

“In the Independent op-ed, he said “He (Netanyahu) is like a man who pretends to negotiate the division of a pizza while continuing to gobble it.” ‘

It’s not topical, but Yolande Knell gratuitously quotes that mischievous analogy, and it’s not relevant; but she likes it, and she knows her readers will like it too. Pizza? What’s not to like.
The side-bar uses a Shlaim quote too:

"I'm a supporter of a one-state solution, not as my first choice, but as a default solution in the light of Israeli actions”

"Avi Shlaim, an Israeli-British professor of International Relations and one of Israel’s so-called New Historians, has now come out in favor of such a solution." Continues Knell.  This was quoted in an article written in Haaretz in October 2012, so also not exactly breaking news, but useful for the BBC.

“ the snappy shorthand for a final settlement that would see the creation of an independent state of Palestine on pre-1967 borders in the West Bank, Gaza Strip and East Jerusalem living peacefully alongside Israel.”

“Pre 1967 borders” is Knell’s snappy shorthand for  “1949 armistice lines” which do not represent any kind of territorial frontier but, at Arab insistence, were specifically defined as lacking any such status in the 1949 Armistice Agreement. “

To Knell, the “Islamists of Hamas” and ‘hawkish Israelis’ are two sides of the same coin.

All the nitty gritty is towards the end of the article, when most readers will have lost concentration.

Suffice it to say that the whole thing appears to be written entirely from the Palestinian perspective.

It seems that Mahmoud Abbas fears that a one-state solution would eventually create an apartheid state. I was under the impression that  the anti-Israel movement already sees Israel as an apartheid state, but that aside, why would Abbas fear such a state when he proudly boasts that a Palestinian state would be “Jew-free’” That’s not very nice, is it Mr. Shlaim?
On a lighter note, I see that the last of the highlighted quotes is incomplete.. “After all these years of occupation and struggle and sacrifice, Palestine cannot be moved and placed in someone else's”
Someone else’s what, I wonder? Answers on a homemade rocket-postcard please.