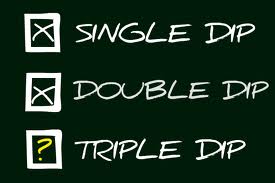 News of positive or negative predictions for the UK economy from international bodies such as the IMF and the OECD often attract the attention of the British media. Today's prognosis from the Paris-based OECD has been no exception.

This morning's Financial Times reflected on the organisation's gloomy forecasts for the eurozone. The  OECD locates the gloom in France and Italy, predicting that their economies will continue to shrink. They say that Germany, however - like Japan and the U.S. - will have modest growth. The FT, naturally, also reports the bit that will be of most interest to its British readers:

At around the same time America's Bloomberg was noting much the same as the FT, though it laid the emphasis on the OECD's call for the European Central Bank to consider more quantitative easing (QE). It also added, however, the mildly hopeful news for us Brits:

Russia Today focused on how the OECD is predicting that Japanese and  US growth will dwarf the eurozone, but it too didn't fail to include the 'good news' for us Brits:

The OECD's prediction that the UK will after all avoid that much-feared triple-dip recession has, understandably, been taken up with gusto right across the British media.

The Daily Telegraph was quick off the mark with:


Hopes that Britain will avoid a triple-dip recession were bolstered after a leading forecaster said the country had already returned to growth and official figures showed the key services sector expanding at its strongest pace in five months.

The Daily Mail soon joined in:


OECD says that the worst of the economic gloom has passed


Predicts growth of 0.5% in the first quarter of 2013, avoiding triple dip

And the Guardian too (albeit rather later in the day) gave its readers the 'good news':

Things, however, take a strange turn when you come to the BBC's online take on the story.

Here it is in full. I'm sure you'll spot a truly remarkable omission on the BBC's part:

The world's major economies will see stronger growth this year, but Europe's recovery will continue to be slow, an international organisation has said.


The Organisation for Economic Co-operation and Development (OECD) predicted stronger growth in the US, Japan and Germany.


But it said concerns remained over the recovery of the wider eurozone.


It said governments would need to keep special measures in place to boost economic growth.
Overall, the OECD forecast an average annualised growth of 2.4% among the seven biggest economies in the first quarter of this year.
That suggests a marked recovery from the last three months of 2012, when leading economies shrank at an annualised rate of 0.5%.
"The bottom line is that we are moderately more optimistic," the OECD's chief economist Pier Carlo Padoan told the Reuters news agency.
But the organisation paints a picture of contrasting fortunes in Europe, where German growth is expected to be relatively strong, while France and Italy are expected to stay in recession until at least the second quarter of the year.
Italy is expected to perform the worst among the seven economies covered, which do not include China.
The OECD said it was still too soon for governments to consider ending economic stimulus measures that are aimed at encouraging growth.
It welcomed recent policy changes by Japanese authorities aimed at tackling deflation and boosting growth.

Yes, astonishingly, the BBC chooses to completely omit the OECD's prediction that the UK will grow by 0.5% in the first quarter of 2013 and by 1.4% by the third quarter.

It covers most of the predictions for other countries (U.S., Japan, Germany, France, Italy, and even China get mentions) but the OECD's predictions for British growth are nowhere to be found in this BBC article (which has remained unchanged since it was first published around lunchtime today).

That is very odd, isn't it?

Why on earth has the BBC News website's only article on this OECD report failed to mention what most British readers and UK newspapers - and even many worldwide media organisations  - consider to be highly newsworthy (especially given that it's about their own country)?

Is it because the BBC is biased against the government, and in favour of Labour? That's the accusation some will certainly make.

The Telegraph reports the 'good news' for the government in this story:

“The UK is doing fairly well I would say ... this avoids a triple-dip in that country,” said Pier Carlo Padoan, the OECD’s chief economist. “We see a global outlook improving after a weak 2012.”

The Guardian follows suit, noting the change in the OECD's position  :

Pier Carlo Padoan, the OECD's chief economist, said: "The situation [in the UK] is still fragile. I think the policy course, both in terms of monetary and fiscal policy, is going in the right direction and improvements are beginning to be seen."

This support for George Osborne's strategy is something you might also have expected the BBC to add to its report. Why didn't they?

Instead the BBC article gives us this photo and caption: 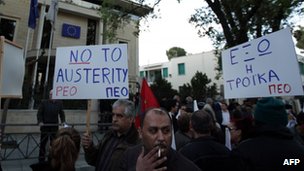 Austerity measures in Europe are continuing to hamper growth

I'm struggling to find that assertion in any of the other articles listed above.

From this photo and caption the reader of the BBC article might well assume that the austerity measures in Britain have been criticised by the OECD today - that "Austerity measures in Europe are continuing to hamper growth" is the OECD's assertion - but (so far as my research tonight can tell) this does not  appear to the the case at all.

So why has the BBC so prominently featured that photo and caption?