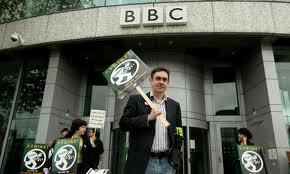 Even as a long-term critic of the BBC I can forgive them an awful lot.

Like many a listener I choked up somewhat as presenter Paddy O'Connell choked up at the end of last week's Broadcasting House. Paddy had, like many listeners, been listening to an audio letter from the widow of a cameraman who had been killed in Syria whilst doing his job. Emotionally upsetting stuff which understandably upset Paddy, leaving him speechless for a while and barely able to finish the show.

I was all prepared to post a damning critique of his show last week but, on hearing that, forgave him and what I felt to be his and his programme's fairly blatant biases throughout the rest of the show. How could I slate someone who responded in such a decent and humane way to such a moving story? Paddy's response prompted articles in various newspapers and sympathetic responses from commenters in the threads beneath those articles. Understandably.

Today's Broadcasting House responded to the many e-mails the programme received in the wake of this. Paddy was away, so Newsnight's Trotskyite economics editor and failed prophet Paul Mason stood in for him.

After an interview with the Bishop of Dudley (and no one else), where the government's benefit reforms were attacked as an assault on the poor and the vulnerable, and after a deeply involving and unusual interview with a victim of child abuse who is experiencing a variety of emotions as a result of police pressure and as a result of fearing the inevitability of media intrusion when the story he's involved in finally breaks into the public eye (as it will), Paul introduced an audio talk from a poet centred on last week's emotional climax. The poet used this platform to attack Conservative chancellor Nigel Lawson, while he was in Mrs Thatcher's government, over his criticism of BBC bias. (That famous Brian Redhead moment).

Given Broadcasting House's tendency to provide a platform for such (unchallenged) left-wing points of view, I will admit that my newly-felt warm feelings towards the programme dipped a bit at that point. It smacked of exploiting Paddy's feelings for partisan, left-wing purposes. Still, I'm sure the programme's makers would say that it was merely the poet's point of view, not the programme's and not the BBC's. That they had given him that platform to say what he had to say seems, it appears, to be besides the point.

Returning to the Vicar of Dibley Bishop of Dudley, I saw a comment on a widely-read anti-BBC site this morning which complained:

Archbishop of Canterbury condemns benefit changes – http://www.bbc.co.uk/news/uk-21731488
Why is this the BBC news website’s main story?!?
One man’s opinion is not major news…

Well, the news that the man who is about to become the leader of the established Church in England has openly backed the denunciation by over 40 bishops (in a letter to The Sunday Telegraph) of a (popular) government proposal on benefit reform is news. Big news. It may be unpalatable news to  committed Conservative supporters, but it is big news nonetheless.

It has been treated as such well beyond the confines of the BBC and the Telegraph.

Paul Mason did all that was required of him in interviewing the Bishop of Dudley. He didn't go beyond that, but did he really need to? He briefly gave the government's side of the argument in his questioning of the Bishop and allowed the Bishop to disagree with it at some length. The letter of impartiality was followed. Whether the spirit was followed is another matter, but the BBC can quibble its way to victory over that very easily.

I very much enjoyed (as Paul himself did) Paul's interview with Radio 3's Clemency Burton-Hill regarding the merits of the music of Justin Bieber. I know Paul is into music, and into classical music. (Hurray!). He strummed out some chord progressions from a Bieber song which echoed some found in one of Mozart's less-loved operas.

I also know - as I'm sure do you - that Paul is into lefty revolutionaries, things kicking off, people #occupying things, power to the people and all that. So, after his all-guitar-strumming, all-singing chat with Clemency, Paul - who I'd expect to be a fan of the deceased Venezuelan Bolivarian socialist revolutionary el presidente Hugo Chavez - discussed the controversial late leader with a couple of fellow lefties. One was the devoutly Chavezophile left-winger Doreen Massey of the left-wing academic journal Soundings, and the other was...well, the wonderful Nick Cohen, left-winger, independent thinker, Observer and Spectator columnist and Chavezosceptic. BBC balance in action. 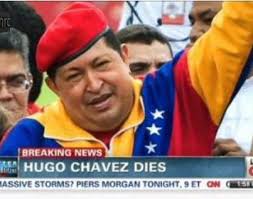 I was listening carefully, expecting Paul to bias the interview in Doreen's favour (especially as he "saw" her "there" at the Occupy protest outside St. Pauls' Cathedral). He didn't quite. He provided instead a third, left-wing voice that didn't quite agreed with either of his guests - though he did intervene to back up Doreen with a sarcastic, far-left-style comment about the UK:

Doreen: "Let's take the media example though, now seriously, that Nick Raised. I went over, the usual innocent thinking 'free press' meant that the press wasn't controlled by the state. Absolutely right. Good point. Get to Venezuela and most of the press is controlled by corporate interests and the rich."

Paul: "Completely unlike Britain then."

Doreen: "Absolutely. Yes indeed. This is what I mean. We could learn from them".

Nick felt the need to say that he had to take "both" of them up on that. He then got into a bit of a tussle with Paul about what Paul was saying. Paul maintained he wasn't saying anything, only quoting what some leftists have said. Still, Paul challenged Doreen over Chavez's caudillo persona and his alliance with arch-human-rights abuser Ahmedinijad. Fair enough?

The subjects? Chris Huhne and his ex-wife, the Extremely Large Telescope (fantastic name!) and the coming Overwhelmingly Large Telescope (even more fantastic name!), excitement about science, Lord Baker's mobile phone going off, the need for a long-term historical perspective, the need for engineers in the UK, the importance of education, the urbanisation of animals (such as badgers), Beppe Grillo, women losing their jobs after maternity leave and heart machines. All interesting stuff. Paul largely kept his views to himself (though we learned that he's not a fan of Silvio Berlusconi, thanks to an ironic aside about Berlusconi ruining Italy. Have to say, I never suspected he was a fan of ol' Silvio!)

Very unusually, the programme ended with a reprise of part of the interview with the Bishop of Dudley, attacking the government's benefit reforms for harming the poorest in society. That is, as the phrase "very unusually" implies, out of the ordinary. Broadcasting House doesn't usually do that. I've never heard it do that before. It did it here. Make of that what you will.

Paddy will be back next week. Thanks for listening.


Update. Here's another take on the programme, from Tim Walker in the Telegraph:

Things have reached a pretty pass in a Left-wing BBC firebrand’s life when he only manages to make one licence fee payer feel outraged. Still, that was all Paul Mason achieved when he stood in for Paddy O’Connell on Broadcasting House on Radio Four.

The economics editor of Newsnight, who wrote a book that suggested the summer riots of 2011 were part of a “global revolution”, was as balanced as you would have expected. He had on “two Left wingers” to debate Hugo Chavez, etc. A BBC spokesman says, however, that the duty office received only one negative call. Even Peter Sissons, the scourge of the BBC, couldn’t be bothered to protest. The BBC pumping out Left-wing propaganda just doesn’t seem to get people up in arms any more.