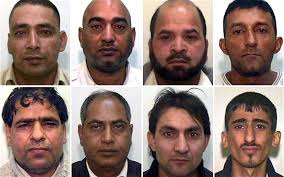 Many of you will remember last year's high-profile child sexual abuse scandal trial in Rochdale. As the abuse was perpetrated by eight men of Pakistani origin and one Afghan asylum seeker and all the victims were white under-aged girls, the case provoked a nationwide debate on whether the crimes had a racial/religious/cultural motivation. Concerns were raised that the police, CPS, local council and social services had failed to investigate the abuse properly out of fear of being accused of being racist/anti-Muslim.

The debate raged across blogs, newspapers, radio and television. Even the BBC, which has been (justly) accused on treading over-cautiously in such matters over the years, aired the debate over the racial/religious aspects (albeit in their own, somewhat circumscribed way). Question Time and all the major Radio 4 programmes debated the issue.

Though there was some resistance to admit the racial/religious elements to the crime from parts of the police, the Children's Commission, the CPS (etc), plenty of people, including Trevor Phillips of the Equalities and Human Rights Commission. Mohammed Shafiq of the Ramadhan Foundation and local Labour MP Simon Danczuk, claimed that attempts to deny the racial element in the crimes were "fatuous" or "daft".

There were critics of the BBC who thought that the BBC was also trying to downplay the racial/religious element. I (like some other commenters at Biased BBC) found good things and bad things in BBC's reporting at the time to be and felt that, with some stand-out exceptions, the BBC wasn't whitewashing the issue. You can read the relevant Biased BBC threads on this here and here.

The BBC returned to the story this week in an edition of File on 4, presented by Jane Deith (a freelance reporter for the BBC and Channel 4 News):

The high profile child sex abuse case in Rochdale last summer - in which nine men were jailed for more than 70 years for grooming underage girls - has been defined as a watershed moment in how the authorities deal with this kind of abuse.


But were there crucial failings?
In an exclusive interview for File on 4, one of the police officers involved in the case claims that flaws in the way it was handled meant important witness evidence was dropped and some abusers were never prosecuted - leaving a new generation of girls potentially at risk and victims seriously let down.
Jane Deith also hears complaints that witnesses were left without adequate support to help them re-build their lives.
Earlier this month the Director of Public Prosecutions, Keir Starmer, published new guidelines for police and prosecutors in such cases. But have they come too late for many victims?

It was a powerful piece of investigative reporting, tenaciously pursuing many serious questions for the police, the CPS, the council and social services.

Remarkably, however, it completely avoided the racial/religious element to the story - and I do mean 'completely'. Not once was the racial or religious background of either the perpetrators - or their victims - mentioned. Not once were the words 'Pakistani', 'Afghan' or 'Muslim' used. The abusers were simply 'men'.(Nor, incidentally, was the word 'Labour' used to describe the local council).

I didn't quite believe my ears first time round, so I re-listened to make sure I hadn't missed something. I hadn't. Just as many critics of the BBC would assume, this BBC documentary about the Rochdale Abuse chose to ignore the charged racial/religious element to the story. Completely.

It was all about process and judgemental attitudes towards the victims. Nothing to do with the race, culture or religion of the attackers.

Rather like the police, CPS and local council at the time, I feel a bit ginger about discussing this. Clearly not as ginger as the BBC though, it seems.
Posted by Craig at 19:47