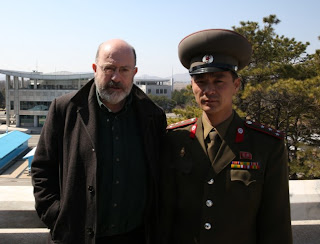 Well, the BBC can certainly give itself a right good whacking at times. If you want to hear a BBC reporter getting violently slapped around (figuratively-speaking) by a BBC interviewer then please give this morning's Broadcasting House a try. The interviewer displaying a surprising amount of rudeness was Paddy O'Connell and the BBC reporter on the receiving end - though he fought back a bit - was John Sweeney, presenter of tomorrow night's Panorama, North Korea Undercover.

As you may be aware, this is the subject of a heated and headline-grabbing row between the BBC and the London School of Economics. Three BBC reporters - including Mr Sweeney - posed as students during a group tour of North Korea in order to carry out undercover investigation inside the world's most secretive  (and terrifying) state. That's a brave thing to do of course. The charge from the L.S.E. is that is that it also put its students at risk. Had the North Korean authorities discovered that three BBC reporters were entering their country under false pretences it's highly unlikely that only the reporters would have got into trouble (imprisonment or a heavy fine). The innocent students being used as cover by the BBC team would, in all likelihood, have been taken into custody too. The L.S.E. contends that the students weren't properly informed and that the university itself wasn't informed at all. Mr Sweeney denies this and counters that there was no need for the university to have been told, as it wasn't an L.S.E. trip. The L.S.E. wants the BBC to pull the edition of Panorama while the BBC insists it will go ahead. Mr Sweeney says that it's ironic that the university is trying to censor a programme which is informing the world about a country that practises the most extreme censorship in the world.

There are many, differing accounts of who knew what and who told what to whom and who didn't tell what to whom and who didn't know what. Other details are disputed too. It's hard for the reader/listener to know what happened, therefore, and who to believe. You too can try and work your own way to the truth through clicking on a variety of newspaper websites. They are all eagerly reporting it. I'm personally uncomfortable with the thought that a BBC reporter might have put students in danger, but I don't really know what actually happened.

John Sweeney has also written an account of his undercover investigation for the Mail on Sunday:

Inside North Korea: No ads, no planes, no internet, no mobiles, no 21st Century... A rare dispatch from deep within the lunatic rogue state enslaved by Zombie and Sons

Mr Sweeney certainly doesn't mince his words in this brilliantly-written article which, presumably, is a close anticipation of tomorrow's Panorama. Having read all manner of pieces about North Korea over the years, the word 'sensationalist' popped into my head while reading it. North Korea is a famously extreme and bizarre country, so that is probably deeply unfair to Mr Sweeney. Maybe all accurate articles about North Korea will come across as sensationalist.

One passage particularly intrigued me though:

Many people think of North Korea as Communist. One year ago Marx and Lenin still had pride of place in a big square in town. But on our trip, they’re gone.


If North Korea is not Stalinist, what is it? Former British ambassador to the country John Everard was blunt: ‘There are sad parallels between North Korea and Nazi Germany and although some people describe  North Korea as a Stalinist state, it’s actually much more accurate to describe it as neo-Nazi. It is deeply racially biased.


‘Kim Jong Il [Kim The Second] was an unabashed admirer of Hitler and copied the Nuremberg marches that are staged in Pyongyang to this day.’

I find this puzzling and will make a rare excursion into general matters to share the reasons for my puzzlement with you (so please forgive me this lapse!)...

From all that I've read about it, North Korea most certainly is a Communist state - i.e. Stalinist, with a tinge of Maoism chucked in for 'good' measure. Being Stalinist doesn't rule out the nationalist element (re "Socialism in one country" in the Soviet Union, "Socialism with Chinese characteristics" in China, Juche in North Korea). Autonomy is not ruled out by Communist regimes either. Likewise the personality cults surrounding the living leader and the extreme reverence for dead leaders in North Korea is only an amplification of similar cults found in the Soviet Union and China. The growth of apart-from-the-people elites has been common to many Communist regimes (and was most famously satirised by Orwell), several of which have kept the highest reaches of power within a tiny circle or even a single family (as in Cuba!).

Moreover, North Korea retains complete control over its economy and over property. Privatization and globalisation are out. The language of socialism, anti-imperialism and 'class consciousness' still pours out of North Korea, just as it used to do out of Communist Russia and China. The extreme denial of individual human rights in the Land of the Kims in favour of collective obedience was shared by Stalin and Mao's dictatorships. If Kim Jong-il admired Hitler and staged Nuremberg-style marches, then so did Stalin. (Stalin's admiration for Hitler is hardly a secret known only to specialist historians and the admiration was mutual). I still remember being shocked at just how Nuremberg-rally-like Mao's mass gatherings during the Cultural Revolution actually were. (We see too few documentaries about Maoist China).

And as for the "deeply racially based" character of the regime necessarily making it Nazi rather than Communist, well that's to underplay the deep strains of racialism in many manifestations of Communism - the genocide perpetrated by the Maoist Khmer Rouge strongly targeted ethnic minorities and is only the most blatant example. A streak of anti-Semitism in the Soviet Union is also impossible to deny.

The fact that many of these features were also shared by Nazi Germany doesn't detract from the point, as Nazi Germany, Stalin's Soviet Union and Mao's China had plenty in common beyond the mere fact of their shared totalitarianism.

The L.S.E.-BBC story looks as if it's got some distance to run yet. Where it will end up is anyone's guess. It would be wise for bloggers to watch and wait.

Incidentally, for those who thought the exchange between Paddy and John Sweeney on Broadcasting House this morning was a bit brutal, well, it could have been even worse for the reporter:

Something similar (albeit rather less rude) happened on The World This Weekend this lunchtime. Presenter Shaun Ley probed the L.S.E.'s Deputy Director, Professor George Gaskell, and then turned to the BBC manager with responsibility for Panorama, Ceri Thomas (former Today editor). Shaun rather blew the whistle on Mr Thomas of the BBC here:


"You're sitting next to him [Prof Gaskell]. You're both in the studio. You could respond to his points directly. We were told you wouldn't discuss with the professor. It seems a bit odd. I presume you didn't like that when you were editor of the Today programme - interviewees not wanting to engage in discussion?"

As I say, the BBC certainly knows how to beat itself up on occasions. (Ask George Entwhistle and John Humphrys!).
Posted by Craig at 15:51