I might be wrong in how I'm reading this tonight, but I think the BBC has been clumsily canny in the way it's now - this very day - trying to have its cake and eat it over the Last Night of the Proms row.

(No wonder such Blairite masters of spin like James Purnell thrive there. This could have come straight out of the Alastair Campbell/Peter Mandelson triangulation handbook.)

They may have been far, far too clever by half though.

A typically huffy statement today from the BBC listed the items in the Last Night, and it included Rule, Britannia! and Land of Hope and Glory (and Jerusalem and Vaughan Williams's Lark Ascending).

The news even had the Defund the BBC campaign claiming a rare people's victory over the BBC.

But, from what I'm reading, the people haven't won yet.

It seems that the BBC aren't going to broadcast the words of Rule, Britannia! and Land of Hope and Glory - the very thing their 'woke', barely-known female Finnish conductor apparently deplores - and that the orchestra will be playing, karaoke-style, without voices.

I have my doubts about this though, as it would be very unusual for the (non-white, 'woke') South African soprano Golda Schultz (a singer unknown to Wikipedia, but the night's star singer) to be denied the opportunity to dazzle by singing Rule, Britannia!, but you never know with the BBC these days.

I can't see a clear sign of which way they're going on this, so it bears watching. I'm still betting she doesn't sing it.

And - despite my beloved Vaughan Williams and his (non-jingoistic) The Lark Ascending being on the programme (shall I predict now that the BBC presenters will push his socialism?) - Elgar has been ditched as the time-honoured master orchestrator of Parry's Jerusalem in favour of Errollyn Wallen.

Who she, you might ask? Well, she's a black British composer probably best known for Mighty River, which "explores themes of slavery and freedom", a piece that features spiritual tunes in a pleasant, tonal, easy-listening, modern classical orchestral garb. Her music isn't off-putting (see her rather romantic and pretty cello concerto), so hopefully her orchestration of Jerusalem won't annoy too many people...

...which I'm guessing is precisely what the BBC is betting too.

Which brings me back to a point I've made before...

Errollyn Wallen's music suddenly, this year, became ever-present on tick-box-fixated BBC Radio 3. (My lockdown WFH Radio 3 morning obsession led me to realise that.) I must admit I hadn't a clue who this Errollyn Wallen, whose music kept being pushed my way, was. It took me ages to Google her. Only then did I realise why BBC Radio 3 was so heavily pushing her. So I'm not in the least surprised that the tick-boxers at the BBC Proms dropped Elgar for Errollyn. If I'd any sense I should have bet on that three months ago.

I suspect this story has further twists to come, but that's my take for now.

Update: And it has.

As I was posting this, the BBC News website published a report tonight: 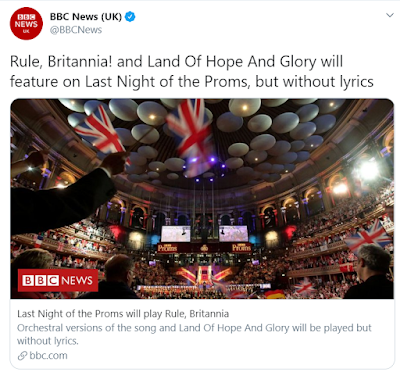 "Without lyrics".
So much for my doubts. Even the BBC confirms that the rumours are true. The BBC has surrendered to the 'woke' brigade.
The words of Jerusalem will be sung but the words to Rule, Britannia! and Land of Hope and Glory won't. Go figure!
They are trying to disguise it in their press releases, but even their own Twitter feed is being unhelpful to them.
Further update: I'm seeing lots of credulous headlines along the lines of Rule Britannia and Land of Hope and Glory WILL be played at Last Night Of The Proms, BBC confirms Land Of Hope And Glory and Rule Britannia tonight. That will please the BBC.
At least the folk at the Telegraph still have their brains switched on: Their headline reads BBC defies Government by announcing that Rule, Britannia will not be sung at Last Night of the Proms.
Posted by Craig at 21:18