Nearly everyone in the non-leftist press and online has given up on the BBC, but due to popular demand (!), we soldier on.

This report in The Times (which I’ll reproduce here for the fun of anyone who doesn’t subscribe) doesn’t appear to be of interest to the BBC.

When a leader of Islamic Relief Worldwide (IRW) was forced to resign last month after describing Jews as the “grandchildren of monkeys and pigs”, Miguel Moratinos was horrified.

In a statement from his New York office, the Spanish diplomat said that he “unequivocally” condemned the many “loathsome social media posts” by Heshmat Khalifa, disclosed by The Times.

He described the comments as “toxic, racist pronouncements that are an affront to human dignity”.

Mr Moratinos’s views carry weight. He is the high representative of the United Nations Alliance of Civilisations on Combating Antisemitism (UNAOC).

In the most recent decade for which IRW’s accounts have been published, from 2009 to 2018, the UN gave the global charity £24.1 million. IRW’s total income in that decade was £967 million. The money also included £20.4 million donated by the EU and £4.8 million from Sweden, Switzerland and Spain.

Over the same period the British taxpayer, through the government’s Department for International Development, gave IRW £8.2 million. It has given the charity no money since 2015.

Much of its additional income is from public donations to the Birmingham-based parent charity or through funding sent to affiliate branches in 16 countries including America, Australia and Germany. The money is used to support emergency aid and development programmes in more than 40 countries.

Since it was founded in 1984, IRW says that it has helped more than 120 million people. In its most recent annual report, IRW said that in 2018 it provided an emergency response to 3.9 million people, sponsored more than 60,000 orphans and improved 3.5 million lives through development projects.

It says that its mission is “to provide lasting routes out of poverty, empowering people to transform their lives and serving all communities without prejudice”.

The 2018 annual report said that IRW’s board of trustees directs and oversees the charity and “makes sure that we satisfy our regulatory requirements as a charity”.

Last month, this global organisation had only five trustees. One of them, Mr Khalifa, called Egypt’s president a “pimp son of the Jews” and described Hamas, the militant Palestinian organisation, as “the purest resistance movement” in modern history. A second trustee, Almoutaz Tayara, described Israel as the Zionist “enemy”. Both men have apologised for their comments, made in social media posts from 2014 and 2015. Each said that he does not hold antisemitic views and opposes terrorism.

The charity said that it “sincerely regrets any offence caused” by the Facebook posts, which “contravene the values and principles of Islamic Relief Worldwide”.

The entire IRW board will resign today and not seek re-election.

Correct me if I’m wrong, and I am willing to accept that something about the resignations of the entire board of Islamic Relief Worldwide and the rank antisemitism within the organisation could be buried in some obscure category in the BBC’s vast online maze that I haven’t the energy to ferret out, but when I tapped Heshmat Khalifa and Islamic Relief into the BBC’s online ‘search engine’, all that came up was the 2014 report below. 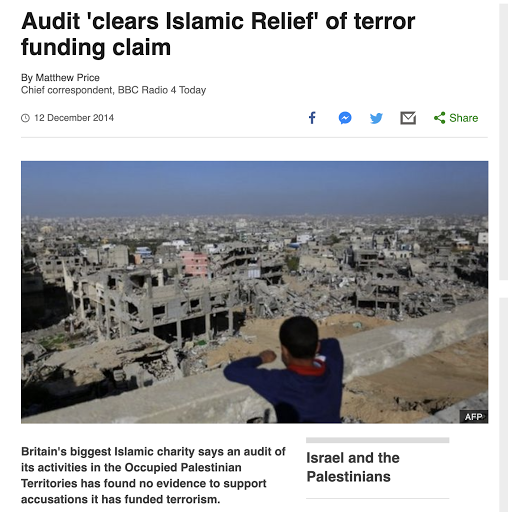 “Britain's biggest Islamic charity says an audit of its activities in the Occupied Palestinian Territories has found no evidence to support accusations it has funded terrorism.

The charity works with international organisations and governments, such as Unicef and the World Food Programme.

Israel has not responded so far.

It started 30 years ago in Birmingham, where it was founded by a group of post-graduate students.

The kind of work the charity does ranges from health and education projects, to help with orphans.

But earlier this year Israel claimed the charity was using its donations to fund the Palestinian group Hamas, which it and others sees as a terrorist organisation.

Islamic Relief suspended its work in the occupied West Bank - where the allegations were focused on - and commissioned the audit.'Robust systems'

It says the audit, carried out over a few days in September this year, shows "absolutely no evidence" of any link to terrorism.

The audit saw projects run by the charity visited, the organisation's paperwork and procedures were examined, and staff and recipients of aid spoken to.

The report does throw up some minor accounting and procedural errors, but finds no evidence that funds have been diverted to Hamas or anyone else.

It also details a thorough screening process of staff, donors, and recipients of aid.

The charity is not publicly saying which company they paid to do the audit - but they do say it is a leading global audit firm.

Islamic Relief says because of what it calls the "sensitivities in the region" it has agreed with that firm not to identify it.

Neither the Ministry of Defence in Israel nor the Israeli embassy in London would comment on the report.

The UK's Charity Commission, which regulates charities, is understood to have received a copy of the report. It says Islamic Relief has done everything it should in keeping them informed of the Israeli allegations and its inquiry.

The UK government has suggested that they see no reason not to continue their relationship with the charity.

The Disasters Emergency Committee, which brings together 13 leading UK charities to deal with acute crises, said in a written statement that it "has considered the independent audit report which reviewed Islamic Relief's operations in Israel and the Occupied Palestinian Territories".

Israel's shutting down of the charity in the West Bank has led to its £5m programme in that area ending. The charity say that has had an impact on the 78,000 people it had been helping.

Meanwhile, there is a wider concern among some development agencies concerning the work of other charities and NGOs in areas where proscribed groups are operating.

Workers in the field fear charities could be forced to limit their work in places like Somalia, Syria and Iraq, because of government and corporate fears that money destined for humanitarian projects in those areas could fall into the wrong hands.

Update 17 December 2014: In a statement, Israel's Shin Bet security agency said it was not possible to respond to IRW's announcement "without an in-depth examination of [the audit's] findings, its scope or who it was carried out by". It said the Israeli government's decision to declare IRW illegal was "based on information that has been accumulated over years, that the fund is a central player in financing of Hamas... [and] on accumulated knowledge and experience in fighting terror and financing of terror organisations".

I’m sorry to reproduce such a long and out of date article, but I kept seeing such emotive language that I couldn’t decide which paragraphs to omit so I’m afraid I left it all in. Not the most ideal format for a blog post I agree. Whether or not any donations found their way into the hands of terrorists or directly funded terrorist activities is beside the point here. The BBC’s article sends a clear message: “The poor little charity = innocent. Spiteful Israel = guilty.”

The UK Charity Commission and the government’s international development arm DfID have a lot to answer for,  but the BBC’s anti-Israel bias (which spiked in 2014) and its habitual and ongoing Islam-friendly cover-ups, which existed then and are still going strong are outrageous.