So what they're saying is... 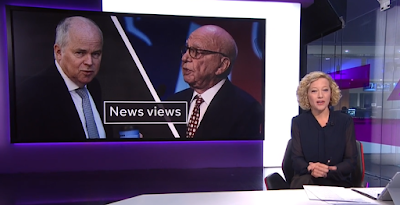 On the same theme as the previous two posts, here's a transcript from Channel 4 News on Cathy Newman's interview with Tim Montgomerie and Ed Vaizey.

I'd only add in advance that Mr Vaizey - a former minister for culture - is out-of-date (ill-informed) as far as LBC is concerned. Nigel Farage was forced out of LBC in June.

Cathy Newman: Fair, balanced and impartial, that's the law for anyone broadcasting news and current affairs programmes in the UK. But two new channels are hoping to capitalise on what critics of the BBC have described as its "woke, wet" agenda. One is spearheaded by former Downing Street advisor Sir Robbie Gibb, the other is reportedly being mulled by Rupert Murdoch's News UK. Both insist they will be impartial. Well, to discuss I'm joined now by the former culture minister Ed Vaizey, who's talked of the BBC's "massive public support", and Tim Montgomerie, a former prime ministerial adviser who's accused the corporation of "Guardianista wokeness". And before we start, I should say in the interests of transparency, this is my main job, but every Friday I also present a show on Rupert Murdoch's Times Radio. Tim Montgomerie, it is denied that it is going to be Fox News, either of these channels, so how different is it from what we have at the moment?

Tim Montgomerie: I hope, I don't know, I'm not part of either initiative, but what I would hope would be there would be true diversity in terms of the editorial rooms of these proposed channels. There is a lot of focus, and it is a good focus, on diversity of gender and ethnicity in BBC and I'm sure Channel 4 editorial staff conferences. But where, for example, are the Brexiteers? Where are the people who go to church? Where the people who would take the side, for example, of Israel rather than Palestine in the Middle Eastern debate? What there seems to be a lack of in the main establishment broadcasters in Britain at the moment is the sort of intellectual, philosophical diversity that I think produces programmes that really will understand where the whole country, the whole of the viewing audience, is. If it that is sort of diversity then we will get real impartiality from these channels.

Cathy Newman: Ed Vaizey, do you agree with that?

Ed Vaizey: Yeah, I do - up to a point. I think the comparison of these channels to Fox News is a distraction, although it helps get their news on the news as it were. I think the model is more closely aligned actually to Times Radio and to LBC. I think the people behind the channels have seen, for example, the amazing success of LBC, which is owned be Global Radio, a UK company, and is now thanks to digital radio a national station. And opinion ranges. And the key about LBC is that, on the one hand, you have Nigel Farage, who may be meat and drink to Tim, and, on the other hand, you have people like James O'Brien, who is more of my sort of politics if you like, and that way it sort of achieves impartiality, but each programme has a particular slant, and it it does attract listeners - though there is no doubt at all that these two channels are also potentially looking over their shoulder at Fox News, which is an absolute cash machine for the Murdoch empire and has been proved very lucrative for them.

Cathy Newman: Tim Montgomerie, is opinion really needed? I mean, I accept what Ed's saying. You can be opinioniated, as long as across the board it is impartial and it balances out so you keep within the law, but is that sort of opinion style of broadcasting really needed?

Tim Montgomerie: Not necessarily. But what a broadcaster chooses to report is also a reflection I think of the diversity of who they employ. Channel 4, for example. Recently Krishnan Guru-Murthy had an interview with the head of the Metropolitan Police, and it was an interesting interview, but of all the questions were focused on questions of institutional racism. Those are legitimate questions, but when I saw the interview I thought, 'Where are the questions being asked on behalf of Londoners who are worried about violence or an inadequate police response to the violence?'...

Cathy Newman: (interrupting) Well, I mean, did that happen to be the whole...but Tim, I must interject there. The whole issue of racism is a huge story at the moment with the Black Lives Matter protests, so a legitimate line of questioning to the Metropolitan Police commissioner.

Tim Montgomerie: It is, and I wouldn't deny that for a second. They were very legitimate questions. But a lot of Londoners would also say they're very worried about knife crime and they're very worried about other forms of crime, and those questions were not asked. And I think a different kind of person who was on a channel with a different philosophical background might sort of have said before that interview was made, 'Aren't we going to ask about these questions, which worry Londoners just as much as questions of racism?'

Cathy Newman: Without getting into a discussion about Channel 4, we have repeatedly covered issues about knife crime and repeatedly put those questions too. But Ed Vaizey, is this really just a way of bashing the BBC? Tackling the BBC? Should the BBC rather be cherished rather than chastised?

Ed Vaizey: Well, obviously the BBC should be cherished against its detractors like Tim who seem to be obsessed with what the BBC is doing wrong. We should cherish the BBC for a number of reasons. First of all, obviously interviews are driven by the news and you quite rightly point out you can have the Metropolitan Police commissioner on when Black Lives Matter is in the news and you'll have her on when knife crime is back in the news and you'll challenge her then. But secondly, we live in an age of grotesque disinformation, particularly on the internet. We need more than ever our public service broadcasters. And I don't understand, for example, why the launch of these news channels has to be predicated on the fact that they are only good because the BBC is so terrible. That is absolute rubbish. We depend hugely on the BBC in this kind of 21st Century digital age. Around the world people look on the BBC as this extraordinary broadcaster...

Cathy Newman: (interrupting) Tim, I just want to...OK...we are running out of time...

Ed Vaizey: ...and I can't believe we are full of people just denigrating it.

Cathy Newman: Sorry to interrupt. Just want to get Tim Montgomerie to respond to that cos...Do you think the licence fee should be scrapped? Is the BBC failing us, or is it a jewel in the crown?

Tim Montgomerie: Despite what Ed says, I actually do want the BBC to continue...

Tim Montgomerie: ...but a poll yesterday in the Daily Mail...and by 52% to 17% the people who pay that licence fee think the BBC is too politically correct. If those people who really believe in the BBC want to save it, that problem needs to be addressed and not pretend that it doesn't exist.

Cathy Newman: Thank you. Tim Montgomerie and Ed Vaizey, I'd love to carry on talking...

Ed Vaizey: So would I!

Cathy Newman: ...but thank you both very much. We will. Yes, thanks very much for that.