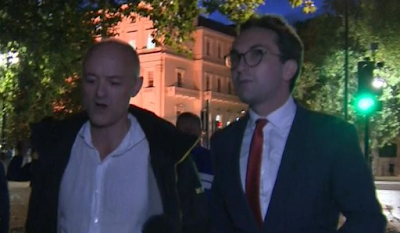 Perhaps the most revealing lapse in Lewis Goodall's New Statesman piece about the UK exams debacle is where he plays to the gallery over Dominic Cummings:

It is hard not to dwell on the fact that at the heart of this government is a man who mandates the reading of a book entitled Superforecasting for political ­advisers, who lauds the scientific method and its predictive capacities, and who has forged a remarkable electoral record through the employment of data to understand how voters think. We cannot know the extent of Dominic Cummings’ involvement in this sorry episode, and it may be that he was not part of it at all. But his approach encapsulates a method of governing that was on full display throughout.

So even though he admits that Dominic Cummings may not have even been involved, he just drops his name in and, thus, associates - or, perhaps more accurately, smears - him with the mess.

It may be "hard" for him not to "dwell on" Dominic Cummings simply because it appears that he's obsessed with the man, though knowing that plenty of like-minded people (his gallery) are similarly obsessed can't help either.

Here are two links that demonstrate that obsession. Just spend a few minutes browsing through them and you'll see that they are neither dispassionate nor balanced:

His pre-BBC tweets with the word 'Cummings'

His BBC tweets with the word 'Cummings'

It may, of course, be personal. Many of you will have seen this at the time but it makes for fascinating viewing even now:

As promised, full 5 mins exchange between me and Dominic Cummings where, among other things, he suggests the Prime Minister intends to go around the Benn Act. https://t.co/JjcpEez1d9

All this said, who am I to accuse Lewis Goodall of being obsessed about Dominic Cummings? After all, I appear to be at least as obsessed with Lewis Goodall!