Comments Could Be Going Better

The more the BBC does this the more it harms itself: 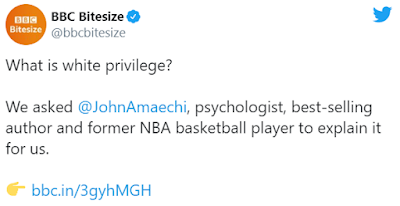 Patrick O'Flynn: BBC indoctrinating school kids with guilt complexes and cultural Marxist BS is one thing that really pushes my buttons. Simply unacceptable from an organisation that levies a compulsory subscription fee. On reflection, the most insidious aspect of this (which I tweeted an initial reaction to last night) is the BBC's use of the term "explain" to describe an eminently contestable analysis. That kids are led to believe these are established truths and cannot be contested is awful.
Dr Chris Newton: Radical left wing propaganda for kids funded by the BBC license fee payer. And the Tories, with an 80-seat majority, just stand by and let this one-sided indoctrination happen. Unacceptable. Unforgivable.
Calvin Robinson: The BBC is obliged by its charter to “bring people together... and help contribute to the social cohesion and wellbeing of the UK”. Instead, they are producing divisive material and fanning the flames of racial unrest. All while wanting a "greater role in children's education".
Ian Leslie: OK, but isn't the more important question whether the BBC should be treating a tenuous and contested concept as if it's neutral scientific knowledge? There are people who aren't well versed in social theory? Shocking. But surely whether it's a good explanation or not, it's a political term adopted by a particular cohort & the BBC should contextualise it as such.
Frances Smith: Total nonsense. People are all born with an array of advantages and disadvantages, what this does is elevate skin colour above all others, and talk as if it were all that mattered. No wonder it annoys so many people. BBC shouldn't mainstream such easily contested theories.
Karen Harradine: The poverty stricken, mainly white communities of the Rhondda Valleys don't epitomise 'white privilege', a nasty concept riddled with conceptual holes. Why is the BBC race baiting again? And why are we forced to pay for it?
Madeline Grant: I’m old enough to remember when BBC bitesize was good for French vocab tests and GCSE history flash cards.
Darren Grimes: My two brothers, younger than I am are the grandsons of a miner, both without their father, both unemployed after attending rubbish state comprehensives and I’m supposed to believe they’re somehow privileged? The fact this is pushed by the BBC’s revision resources is dangerous. With BBC videos for children on white privilege, podcasts on 'Karens' and now the hounding of pensioners as the one group that they know are more likely to rely on their television set to combat loneliness, the BBC seems to be begging the government to act.
Jane Kelly: Why is the BBC asking this fatuous, racist question?
Tim Montgomerie: There are few bigger drivers of social justice than a stable family; especially built around marriage. Where’s the BBC video promoting that or the politicians arguing that? Belief in family isn’t fashionable but kids with two loving, committed parents have won life’s lottery.
Dr Rakib Ehsan: "Your skin colour has not been the cause of your hardship and suffering". Try explaining this to underaged white girls who fell victim to cases of large-scale child sexual abuse. Cases fundamentally mismanaged by public authorities which were looking to "protect" race relations.
Laurence Fox: Anyone who choses colour of skin over content of character as a way of defining people, is a racist and racism should be stood up to wherever it rears its ugly head, however pretty a bow it’s wrapped up in.
Martin Daubney: That’s why the BBC has no place in education. Their “white privilege” propaganda actively suppresses those who are in the most need of help. It chokes policy & strangles hope. It actively divides our country. Rant over.
ZUBY: If BBC Bitesize have the cojones, I'd love to make a counter video for them explaining why 'white privilege' is a divisive, myopic, offensive and potentially dangerous idea that we shouldn't be perpetuating. Let's get both sides.
Steve Crowther: It is absolutely heartbreaking for a lifelong BBC loyalist like me to see what has happened to this erstwhile jewel in the national crown, now gone completely rogue. How dare they stoke racialism? How dare you, BBC?
However...
John Amaechi OBE: Overjoyed to see that our BBC Bitesize White Privilege vid has now surpassed 1.1 MILLION views. A big Thankyou to all who shared, most notably the racists (open and closeted) who gave it a big boost and probably educated many as a result. Thank you!
*******
UPDATE 9.30pm: Andrew Neil has now entered the fray: