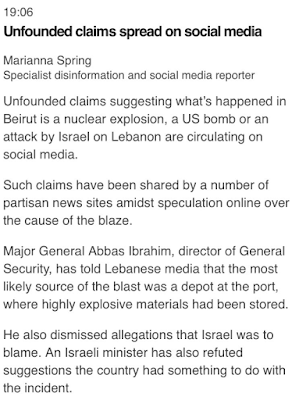 And yet (h/t Terry), barely an hour earlier the "partisan news site" sharing one of the three "unfounded claims" she mentions - the claim the devastating explosion in Beirut might have been the result of an Israeli attack - was the BBC itself in the shape of its obsessively anti-Israeli BBC's Middle East editor Jeremy Bowen on Radio 4's Six O'Clock News:

A BBC journalist at the scene reported dead bodies and severe damage, enough to decommission the port - a huge blow in itself to Lebanon which imports almost all its needs. Smoke was already rising when the building was vaporized. Windows were broken across the city. Some local reports have suggested it was an accident at a fireworks storage warehouse, but many other theories have emerged including an Israeli attack. The Israeli military said it did not comment on foreign reports. Tensions in the heavily armed border region between Israel and Lebanon are high. Hezbollah, the Lebanese Shia militia and political party, threatened vengeance after one of its fighters was killed in an Israeli air strike in Syria. Israel has accused Hezbollah of mounting cross border attacks. If the explosion relates to the wider Middle Eastern conflict it's a serious escalation. If it is an industrial accident it could be another symptom of Lebanon's overwhelming political and economic crisis. all coming on top of a serious outbreak of Covid-19. That in itself will cause more national despair in a country that some local analysts fear it is collapsing under the weight of its problems.

As Marianna Spring says, that surely risks spreading misinformation. Both Hezbollah and Israel have ruled it out as an Israeli attack and the Israel government has offered to help Lebanon recover from this terrible catastrophe. Why on earth would he spread rumours of an Israeli attack? Isn't that astonishingly reckless and irresponsible from the BBC's Middle East editor so soon after a devastating event?
Posted by Craig at 06:41