The Battle of the Generations 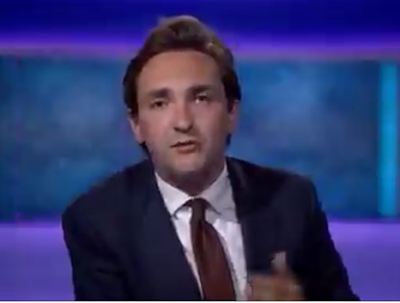 And it wasn't just Nick Robinson...

I see that Newsnight policy editor Lewis Goodall entered the fray too - while simultaneously continuing his feud with former BBC head of news/Mrs May spokesman Sir Robbie Gibb.

Earlier yesterday he tweeted the following:

I’ve been trying to think of a way to show that often, when someone attacks the BBC or other broadcasters for not being impartial it’s really because it’s saying something they don’t want to hear and would rather have their own views reflected back at them. Well, here we are.

He then linked to a Mail on Sunday front page story headlined Top Tory launches rival to 'woke wet BBC'...and that 'top Tory' turned out to be none other than old nemesis Sir Robbie Gibb (who repeatedly criticises him for showing bias).

Lewis isn't, however, being either fair or accurate in reflecting the aims of what Sir Robbie's new outlet, GB News, seemingly intends to be, which the direct quotes in the MoS piece make clear:

'The channel will be a truly impartial source of news, unlike the woke, wet BBC. It will deliver the facts, not opinion dressed up as news.'

'Everyone who works for GB News will have total commitment to quality journalism, to factual reporting and to impartiality.’

There’s been an effort for a while by some to try to make scrutiny and partiality one and the same. Needless to say, they are not. Indeed lack of proper scrutiny is the worst partiality a journalist can be guilty of.

He's talking about criticism of his own reporting of course, which he evidently sees as very much being about "scrutiny" not "partiality".

Hmm, but if the target of your "scrutiny" is focused overwhelmingly in just one direction only it can still be "partial", can't it Lewis?

Thankfully, his usual echo chamber on Twitter was invaded by hordes of critical voices, many emerging among the 'most-liked' comments. A lot of them cast doubt on his own impartiality.

I don't want to hear my views, instead, or anyone else's.

Any other suggestion is disingenuous and desperate.

Lewis will doubtless continue to drag the BBC into these kinds of argument though and, of course, go on having his own say on everything under the sun - unless new DG Tim Davie does something about him.