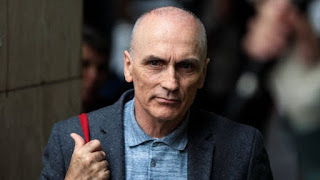 We’ll have to wait and see…. I’ve waited, but I haven’t seen much.

If you wanted to find out
How this shambles came about
Like the man upon the stair
Certain details weren’t there
I hope you think it’s fair to say
They weren’t there again today.

Of course, you can always look elsewhere.

It seems that the NEC has the final say as to whether a case can be referred upwards, or dumped. There were just three individuals tasked with making this decision.

A clash of diary dates meant the at least one and possibly two of the three were last-minute substitutes. One panellist was Keith Vaz, which is surprising enough, all things considered. He voted for reinstatement, and another of the trio voted against. The decider fell to someone who is an active anti-Israel campaigner by the name of Huda Elmi.

As we know, Chris Williamson was duly readmitted.

I understand one potentially mitigating factor in this fiasco is that his re-admittance might have been partly a procedural strategy - a kind of emergency caused by a deadline for members wishing to stand for re-selection. It seems that had Williamson not been reinstated his future candidacy would have been ruled out. I may not have fully grasped that - but that seems to be the gist.

This is almost unbelievable but you better believe it anyway. I’ve seen Corbynite fanatics defending Mr Williamson - for example insisting that the antisemitic mural wasn’t antisemitic, but of course, this is about a pattern of behaviour, the final straw being the speech in which he said the Labour Party had been too ‘apologetic’.  I mean, how can an avowedly anti-racist party be too apologetic?
Should they just have been a little bit apologetic?

It’s a pity the BBC isn’t interested in Huda Elmi  and her suitability for participation on this crucially important panel.


I thought Sky had a slight edge on the BBC this afternoon in the breadth and depth of their reporting of this subject. However, the BBC’s Simon McCoy was more objective than Ben Brown, who seemed to be carrying out his role as devil’s advocate with rather more enthusiasm than is absolutely necessary when interviewing Louise Ellman.
I wasn’t especially impressed with Kay Burley; on balance, it was Sky's Sam Coates who presented the most professional coverage of the story this afternoon.

Looking at the Twitter responses to Tom Watson’s Tweet of the 90+-signatory letter, the majority of Williamson’s defenders have relied on the same set of ill-informed anti-Israel allegations to support their case.

Criticism of Israel was a recurring theme, obviously founded on the ‘half-a-story’ reporting we’ve been pointing out for years. You get “Stolen Land” “Apartheid State” “Jewish Lobby” “Baby murderers” and so on.  I realise that most who see themselves as supporters of the ‘Palestinian people' are predisposed to accept, unquestioningly, the full quota of hostile antisemitic propaganda that is put before them.

The media aspires to be ‘better than that’, but the supposedly impartial BBC itself is full of people primed and programmed to approach the Middle-East conflict through the same hazy Palestinian viewfinder. They have little curiosity or originality. Jeremy Bowen and Tom Bateman are just two examples. Yolande Knell, too. Their one-sided approach is at the heart of the current epidemic of antisemitism.

Apart from anti-Israel rhetoric,  the Twitter trend is towards insisting that they “can’t see anything antisemitic” in what Chris Williamson has ever said or done.  And why indeed should they be expected to know that endorsing the obnoxious antisemite Gilad Atzmon or any of the other discredited Labour Party members amounts to antisemitism? These people wouldn’t recognise antisemitism if they were slapped round the head with a wet swastika to cries of “Heil Hitler”. Well, maybe then.

I see several baronesses in the list of signatories, but with one glaring exception. So, where’s Shami?