I’m beyond embarrassed & angered that BBC News would have a replica of the ‘blimp’ in their studios. President Trump represents the American people who are our greatest allies. Abhorrent that the BBC is showing them such vile disrespect as we honour their sacrifices during WWII!

...prompted this response from Tim Montgomerie:

Extremely poor decision by the BBC.

If you've not yet seen it, here's what they're talking about. It featured throughout the opening minutes of the Victoria Derbyshire show. 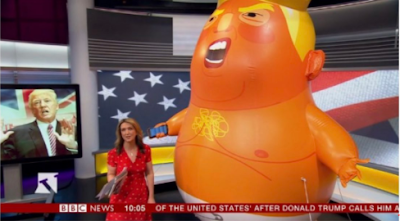 Now, though many thought the programme's decision was absolutely outrageous (with some calling for BBC heads to roll), others praised the BBC for reflecting their (anti-Trump) views, with some of the latter even accusing the programme's critics of trying to suppress free speech! (Reminder to such people: The BBC is meant to be impartial).
Posted by Craig at 14:29