A tweet I read earlier tonight (after I got in from work) read, "I trust that BBC News,  Sky News and Channel 4 News, who all led with the vexatious case against Johnson will lead with the fact not just that he's not guilty, but that there was never a case against him to begin with?".

And then, tuning into another blog, I spotted StewGreen saying, "Since the summons against Boris was the main headline in each news from 10am to 11pm [back on 29 May], the news of the case getting thrown out will be reported in the same magnitude? Nah, of course not cos BBCnews/Guardian are really a public relations agency in favour of the metro-liberal agendas".

So, wanting to catch up and check this out for myself, I switched on the BBC One News at Six headlines to see if the 'good news for Boris' was getting the same 'headline news' treatment that the 'bad news for Boris' on exactly the same story got.

Well, you don't need to be Dr. Mike Galsworthy to guess the answer to that one!

The story didn't even feature among the opening headlines.

Checking back (via TV Eyes) BBC One's New at Six on 29 May led with the Boris summons story. The programme began as follows:

Boris Johnson is ordered to appear in court over claims he lied during the EU referendum campaign. He stands accused of lying about the UK giving the EU £350 million a week.

(Two uses of variants of the verb 'to lie' in two sentences there!)

Contrast that with tonight's bulletin - which continued precisely the same story.

Boris's legal victory wasn't in the headlines (as we already know). But where in the running order did it appear? Second? Third?

No, it came fourth.

And rather that the first seven minutes or so, it got just over two minutes.

Hmm. This looks like clear bias. But let's pause and think what the BBC's defence might me for such a blatant difference in prioritisation. The only one I can think of is that today's top three stories - the Sally Challen story, the hospital listeria outbreak story and the Peterborough by-election story - might have trumped it for news importance and that the original story got top spot because it was 'a slow news day' - and, checking back, there weren't other obviously major stories that day.

It seems lacking in due balance.

But that's not the half of it. The report on tonight's BBC One News at Six ran as follows:

Helena Wilkinson, BBC: The leadership contest is well under way but today Boris Johnson had a different battle. In court, his lawyers were trying to stop him from facing a criminal trial. This is the man who accused Boris Johnson of misconduct in public office. Last week a court decided there was a case for Mr Johnson to answer and he was due to be summoned. But today, that decision was overturned.
Marcus Ball: We've just given the green light for every politician to lie to us about our money for ever. That's a terrifying idea which I cannot accept, and I'm not going to give up.
Helena Wilkinson, BBC: This was one of the main messages of the Vote Leave campaign. Boris Johnson had claimed £350 million was being sent from the UK to the EU every week. It was a contested claim, with many people saying it was a lie. But did it amount to a criminal offence? In court, Boris Johnson's barrister argued that the offence of misconduct in public office, which is what Mr Johnson was facing, had never been used in the context of a statement in a political campaign. Adrian Darbishire QC said the offence was about the secret abuse of power and that there was nothing secret about what Mr Johnson was claiming. His supporters say the case should never have gone to court.
Jacob Rees-Mogg: To try and fight political debate through the criminal courts is what happens in dictatorships. It's not what happens in democracies.
Helena Wilkinson, BBC: For Mr Johnson, an unwelcome distraction, now gone away, allowing him to focus on his next campaign, to become the new Prime Minister. Helen Wilkinson, BBC News.

Now, that's obviously, superficially balanced. You've got Marcus Ball, the man who brought the summons against Boris Johnson, and Jacob Rees-Mogg defending Boris. One of each side of the argument.

But why place Mr Ball first?

And look at the way the BBC's Helena Wilkinson lays out the story. The bold emphases in the transcript there are her emphases. And her choice of words steers viewers towards the belief that Boris Johnson had lied about that £350 million claim.

And while we're on this story, I looked at the main three broadcasters' websites earlier tonight and screengrabbed their headlines for this story. 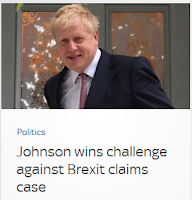 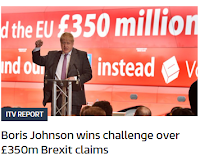 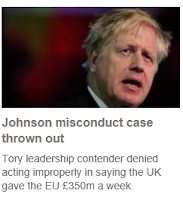 And just look at the words used in the BBC headline/sub-headline, and the word association they conjure: "misconduct", "thrown out", "denied" "improperly". Even though he won his legal challenge, the BBC still makes him sound guilty.

That surely is clearly biased journalism? Can anyone think of a defence for it?

And that's even before we compare the choice of photos! Sky has a smiling Boris, ITV an exuberant Boris and the BBC a tormented (guilty-looking) Boris.
Posted by Craig at 21:23