As Dr Paul Stott (SOAS) tweeted, "Events come at you quicker than you think". He was talking about Birmingham Council, following this tweet from the National Secular Society:

Anti-LGBT campaigners have accused Birmingham City Council of breaching the APPG on British Muslims's Islamophobia definition, which the council has adopted, by restricting their protests. This vague definition will restrict necessary criticism of Islam.

I'm intrigued to see how the BBC will handle this.

And talking of councils, there's another news story today that I'm looking for the BBC to report. A Labour councillor on Teesside Council, Denise Rooney, is in trouble. It's alleged that she shared the following disgusting message on social media: 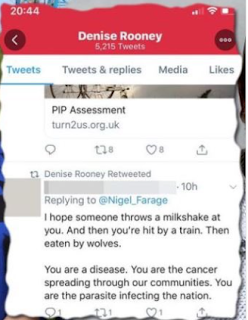 Andy Preston, the new (independent) major there, is calling for her to apologise. ("I Won't Call For Labour Councillor To Resign. But I do think she posted a stupid and nasty tweet. We're all capable of saying and doing stupid things on social media. I think that if Councillor Rooney can humbly apologise  then this fuss will probably go away. Andy"). But what makes this story so fascinating is that Cllr Rooney flat-out denies re-tweeting it, only saying - after being pushed on it -  that she may have sent it accidentally. She alleges dirty tricks, claiming it's a diversion to draw attention away from an antisemitism row involving an independent councillor (though the offending comment was posted when he was a Labour Party member!). The plot thickens.
Posted by Craig at 09:22