Which UK political party's membership is over 95% white?

For our many collectors of examples of the BBC repeatedly pushing the 'maleness, paleness and staleness' of those 160,000 Conservative Party members who are eligible to choose Our Next Prime Minister, tonight's PM on Radio 4 gave us another gem:

Jeremy Hunt is still taking questions from the audience while we're on air and they are some of the 160,000 or so Conservative Party members who will decide which of the two men becomes the next Prime Minister. According to research by Queen Mary University London last year that membership is three-quarters men, while 9 out of 10 are middle-class, 97% are white, and just over half live in London and the South of England.

That 97% figure, much quoted by the BBC, prompted me to actually find the source of it - and PM's citing of Queen Mary University of London helped me find it.

And what an eye-opener it is!: 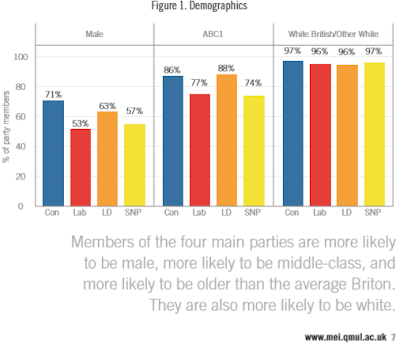 Yes, it does find that Conservative Party members are 97% white, but it also finds that the SNP is similarly 97% white and that the Labour Party is 96% white and the Lib Dems are 96% white.

Every party has a majority male membership too, though the Conservatives do stand out a little there.

So why are we getting BBC news bulletins (like yesterday's BBC One News at Six) and BBC reporters like Matthew Price and PM hosts like Caroline Wyatt (etc) making so much of the 'whiteness' and 'wealthiness' of the Tory Party membership when all the other big parties'  memberships are just as white and roughly as wealthy?

And, not to be self-promoting (something it's usually hard to accuse us of being!), but why is this tiny, unfunded two-person blog able to find this out - and point this out - while the massively-funded BBC simply just parrots it about the Tories without mentioning the figures for the other parties?

I'm so glad I listened to PM tonight. I feel as if I've busted an endlessly-parroted Big Lie.
Posted by Craig at 23:31