I took a screengrab at just after 1 o'clock this afternoon from Sky News, ITV News and BBC News.

All the channels were gearing up for the march in Paris.

As they had been doing so, a story had been breaking in Germany - an arson attack on the publishers of the Mohammad cartoons in Germany.

The story features prominently on the Sky News homepage: 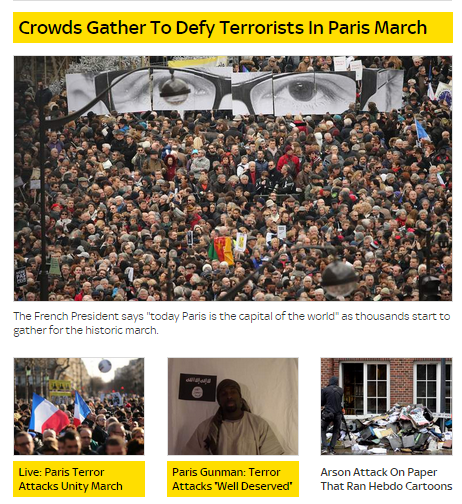 And on the ITV News homepage:

But not on the BBC News homepage: 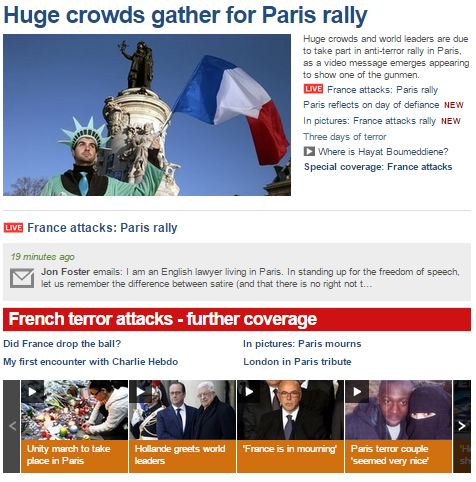 The thought crossed my mind at the time that the BBC might not have been wanting to detract from its 'moving on' message of 'unity' by spotlighting such an unhelpful development...

...though, being a non-conspiratorial kind of guy, I put that thought aside.

But reviewing today's BBC coverage, I'm not so sure now that I should have put that conspiratorial thought aside.

The news - on the very day of the big march in Paris protesting against the massacre at Charlie Hebdo - that another of the high-profile publishers of the Mo cartoons has been attacked is important, isn't it?

So why wasn't the BBC reporting it on its homepage? Or, checking it out again now, even on its Europe page (where it has space for Dresden protest against Pegida)?

I've searched the BBC website and, yes, there are no results for 'Hamburger Morgenpost'. I've checked Google News and both ITV and Sky have updated their stories (both several times). And it's also been reported by the Guardian, the Independent, the Telegraph, the Express, etc.

Can it really be the case that the BBC chose to ignore this story because it's unhelpful and inconsistent with its 'message of the day': That it's time to unify and move on?
Posted by Craig at 20:13