The BBC doesn’t understand why some people are calling for the sacking of Tim Willcox.  As Hadley Freeman says in her article, reminding Jews about ‘Israel and the Palestinians’ to apologise for Muslim antisemitism is fair game to the BBC. To them  “It’s swings and roundabouts”

The person who really ought to be sacked is Jon Donnison. His relentless Tweeting is so blatantly biased it’s almost as if he’s playing a game of chicken. Seeing how far he can go before getting the boot. Some kind of bravado or something.

Jeremy Bowen might like to take a refresher course as well. I’m not 100% sure, but I think there’s a whiff of that pendulum swing I used to write about.

Look at the article in the Guardian of all places - I seem to be using that phrase a lot lately - by Hadley Freeman.
She begins with a tale about her great uncle Alex and his experiences of France. A dramatic escape from a train destined for Auschwitz; time in the resistance; returning the Légion d’Honneur after de Gaulle’s derogatory and antisemitic remarks.

The article was Hadley’s response to the increasing antisemitism here in the UK. She mentions the BBC, Tim Willcox, Maureen Lipman’s feisty letter to Ed Miliband, Mumbai, Dieudonne and of course Charlie Hebdo. It was a lucid and sympathetc piece, and what surprised me - I’ve used that phrase  a lot recently - was the tone of the below the line comments. This is the Guardian!

The surprise was that some of the comments are relatively even handed; there is a trend towards separating ‘pure’ antisemitism, which they abhor, from anti Zionism, which they’re not quite so sure about, but there are signs that the sheer violence of Islamist Jihadism around the world has made some people think twice about Israel’s predicament. 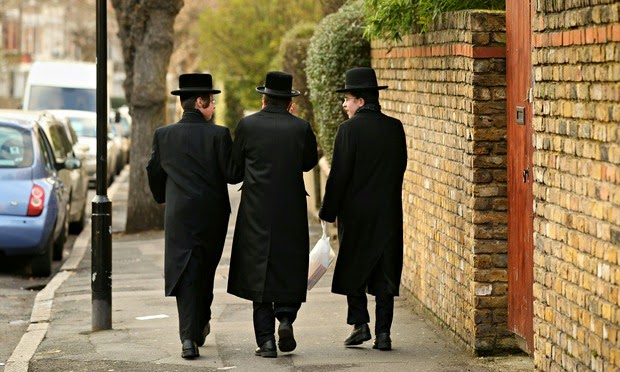 Just as many people are slightly uncomfortable with the media’s habit of using images of orthodox Jews whenever anything Jewish is on the menu, I’m also sort of conscious that articles in the Guardian that tackle antisemitism need a heartwarming story to sweeten the pill.

How much of that sympathy would Hadley have lost if she hadn’t mentioned  great uncle Alex?

"As we reflect (the report says) on the upsurge of antisemitism recorded in the UK over the summer, it is more important than ever that Britain says loudly and clearly that there can never be any excuse for antisemitism. As a government we continue to be committed to doing everything we can in the fight against antisemitism … this is undermined when British Jews are sought out, attacked and abused by individuals or organised groups on the extreme right, the extreme left and Islamist extremists. These attacks are regrettably exacerbated at times of heightened tension in the Middle East."

What is the government going to do? wonders Professor Alderman. Chuck a bit of funding at various projects, he says, but “there is almost no mention of the part played by UK-based Islamic groups in fomenting this upsurge.”

Well there wouldn’t be, would there? It’s for community cohesion, innit?

While we’re looking at the Guardian, what about this? Ed Miliband demands zero tolerance approach to antisemitism?  (What does he think antisemitism is? )
Motes and beams. He’s got a whacking great cabal of antisemites in his own party so when is this zero tolerance going to kick in? Get your own house in order.
Martin Linton, Andy Slaughter, David Ward, Gerald Kaufman, Ken Livingstone and fistfuls of Labour peers are amongst the most infamous. But Ed himself, by prematurely voting for “Palestine” isn’t entirely blameless.

What’s my recipe? Normalisation of Britain’s relations with Israel.  Closer collaboration with Israel. As a country under increasing threat of terrorism, we need Israeli expertise on security. We need close relations so we can share Israel’s cutting-edge technical, scientific and medical know-how. Academia needs collaboration. Academic BDS is a prime example of cutting off one’s nose to spite your (and everyone else’s) face.

Allow British viewers some  exposure to normal, light-weight, run-of-the-mill material from Israel. Embed one of the BBC's open-minded correspondents (if they can find one) in Israel to cover domestic matters. Not Gaza or the West Bank, they’ve got Yolande Knell and goodness knows how many more.
Documentary coverage of ordinary life, culture, domestic matters etc, from as friendly and benign an angle as the films we're currently treated to about plucky Gazans or the Olive harvests of Israel's neighbouring countries, with the aim of dispelling the myth that Israeli Jews are more ‘other’ than Muslim Arabs.
At present the nearest we get to non-hostile coverage of Israel is the occasional report about a scientific breakthrough or a technical innovation.
For years the British public has been seduced into empathising with Gaza. Now it needs to be seduced into empathising with Israel. We need to see something of the incitement that comes from the Arab press and the Arab leadership. Put us on a level playing field at least.
That’s not a big ask, surely.

I don’t think we’ll ever get to see the contents of the Balen report, which in any case must now be outdated. How about a new one, which takes present day circumstances into account, adhering to the principle de rigueur, transparency.