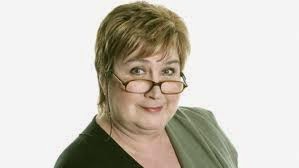 Talking about anti-Semitism, and clicking on what looked like an interesting discussion on Woman's Hour....

There was a Woman's Hour discussion this week between journalist Angela Epstein (worried about anti-Semitism in the UK) and Dr Jonathan Boyd of Reading University (nowhere near as worried, and rather more worried for other minorities, apparently - and I think we can guess who he means).

I thought it might be interesting, in the interests of disinterested blogging, to quote all of presenter Dame Jenni Murray's questions here, following her sceptical-sounding introduction (where she sounded, as ever, like a professorial version of Jo Brand).

The sceptical question (posed in the light of the CAA report) was: "But how justified are Jews in the UK for fearing for their safety and that of their children?"

(For those who confuse Dame Jenni Murray with her champagne-guzzling non-dame partner-in-feminist-crime Jane Garvey, Dame Jenni's the one who always appears to be peering over her glasses in every photo, forever prompting the thought (in me): So why, in the name of the Prophet Mohammad (peace be upon Him), is she wearing glasses in the first place?)

Given Sanchia Berg's report on this morning's Today, casting doubt on the CAA report, and David's recollection of Gavin Esler, on the News Channel, talking to someone from the Jewish Chronicle who was also dismissing the same study, I was interested to see if the good (BBC) Dame tried to do the same here?

Please see what you think:

(1) - (to AE) Angela, what sort of concerns for your children do you have?
(2) - (to AE) Is it a Jewish school and does he wear a kippah?
(3) - (to JB) Jonathan, if I can bring you in here. Last year the Anti-Defamation League described the UK as one of the least anti-Semitic countries in the world. How do you account for the latest poll?
(4) - (to JB) How would you compare this country with others, from your own experience of living here?
(5) - (to AE) But to what extent, Angela...I mean, all right, we accept that what happened in Paris last week was horrific and was frightening, but to what extent have you been just an anxious mum worrying about her children going to school on their own, just like any other mother? We all worry about our children.
(6) - (to JB) Jonathan, you're also a parent. What concerns do you have for your children?
(7) - (to AE) Angela, what about friends and relatives? I mean, we have seen a lot of French people are leaving France for Israel. What about here?
(8) - (to AE, interrupting) Dinner party parlance, or serious stuff?

My view: The discussion was a valuable one and both guests had interesting points to make, sometimes agreeing, sometimes disagreeing, but, on balance, I'd said that Jenni Murray's questions were clearly biased towards the sceptical side. (I'd cite questions 3,5 and 8 in evidence.)

It seems as if the BBC's given its staff another hymn-sheet and many of them are already singing from it.
Posted by Craig at 18:24