Reassuring voices on the BBC 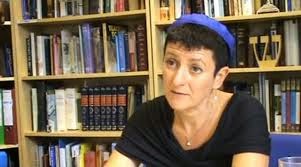 As someone who looks in on the Times of Israel from time to time, I spotted an article there by Laura Janner-Klausner, the Senior Rabbi to Reform Judaism in the UK.

She strongly rejects the findings of the Campaign Against Antisemitism's report, which we discussed earlier in the week. The report suggested surprisingly high levels of Antisemitism in the UK, rising anxiety among British Jews, and a growing percentage (some 25%) saying they are considering leaving the UK.

Being a British Jew is a blessing. My colleague, Rabbi Mark Goldsmith, told the BBC that the Campaign Against Anti-Semitism portrait of British Jewry “did not compute at all with our experience”. How could it, when there is so much to celebrate? We have beautiful and improving relationships with Muslims and Christians, a robust voice in public discourse and the lowest levels of anti-Semitism in Western Europe. I recently witnessed a microcosm of British Jewry at Limmud Conference, where three thousand people celebrated being Jewish: studying, singing, schmoozing. Our synagogues, our youth movements and our cross-communal institutions are not only a model for minority life in Britain, but Jewish life across the world. This is not the 1930s. I am safe as a British Jew.

It has to be said that most of the comments below the article are as sceptical about her position as she is about the CAA's. They think that she's the one who's "disconnected" from what most British Jews think at the moment. One such comment runs as follows:

As with France, it seems like British Jewish leaders are going out of their way to say everything's ok, while the people on the ground are saying something completely different. One wonders whether European Jewish leaders are making statements like the ones in this blog post because they feel they need to strike a positive tone, or whether they are actually out of touch with the Jewish masses.

I'm guessing that someone at Radio 4's Today spotted this article too. It was published two days ago.

On this morning's Today BBC reporter Sanchia Berg went to the North Western Reform Synaogue in London and spoke to both Rabbi Mark Goldsmith and Rabbi Laura Janner-Klausner, who repeated the same message that British Jews are in a good, safe place. Mark Goldsmith said that everyone was, basically, carrying on as normal and that no one has reported any Antisemitic acts whatsoever. Laura Janner-Klausner said that people are calming down and getting "a sense of perspective" and that Britain is much safer than other places in the world.

We also heard from two teenagers. The Today website quotes them:

"Being Jewish, it touched everyone who felt they knew what would it would be like if it was them"

"I feel scared for other religions because they are being misinterpreted".

Actually, the Today website - with its headline "Heightened Concern" for Jewish community safety following Parisian attack - seems to be advancing the "Keep Calm and Don't Worry" message of the report still further by not quoting something that one of the teenagers said. Here's what the boy said in full:

With the stuff that's gone on before this, I'm definitely getting more scared by the day, you know. I also feel scared for other religions because they're also being, you know,  misinterpreted, and things like that."

You'll note that "With the stuff that's gone on before this, I'm definitely getting more scared by the day" doesn't make into into the write-up on the Today website - unlike the bit saying that other religions are being "misinterpreted".

As with a fair amount of BBC reporting at times like this it can be hard not to think that you're being strongly guided towards a particular point of view, and that was definitely the case here, I'd say.

By the way, even though the report came from a reform synagogue, the Today website chooses the following image to accompany the report: 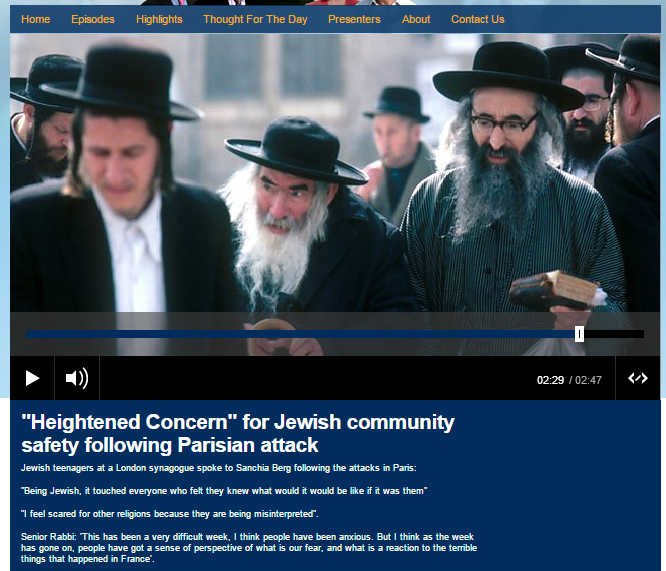