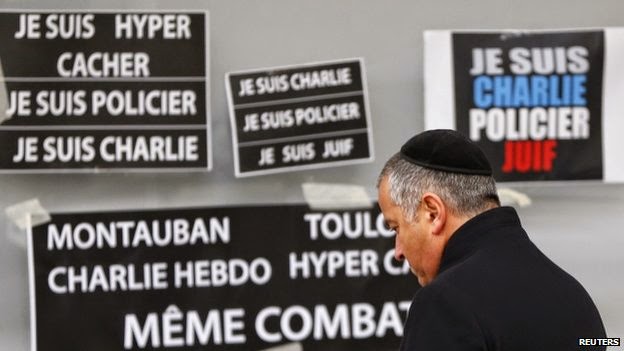 I heard this item on the BBC World Service early this morning. It’s here, quite prominently promoted on the BBC News website.

Kevin Connolly has interviewed some French Jews about why they’ve decided to move to Israel.
Nothing very revelatory here. No mention of who or what is behind the antisemitism that has made French Jews feel so uneasy that they’ve made a life-changing decision to move away from the country of their birth, their language, their culture, to somewhere they feel less ‘other’. I can’t say safer, of course because no-one in Israel has the luxury of feeling ‘safe.’

The nearest we get is this:

Now clearly all sorts of factors will lie behind every one of those individual decisions, but in Israel the rising numbers of French migrants will be seen by many as a kind of rough and ready measure of the level of anti-semitism in French society.

But buried in the text is one remarkable paragraph, which I bring to you with very best wishes.

It's only fair to point out that Mr Levy blames the media at least in part for the current atmosphere and argues that it has tended to demonise Israel in recent years in the wake of events ranging from the first Gulf war to the first and second Intifadas.

Yep. It’s only fair to point that out. In the words of david Dimbleby “I wouldn’t be doing my duty if I didn’t”.